Driving Up Tourism in Abu Dhabi 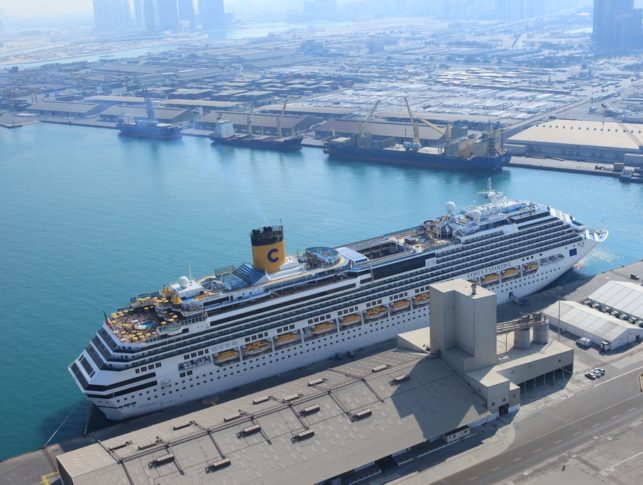 With ambitions to become a top winter sun destination, Abu Dhabi has launched a new cruise ship terminal and is developing its tourism infrastructure.

With ambitions to become a top winter sun destination, last Sunday, Sheikh Hazza bin Zayed Al Nahyan, National Security Advisor and Deputy Chairman of the Abu Dhabi Executive Council, officially opened Abu Dhabi’s first purpose-built cruise ship terminal. With capacity for three ships carrying 5,000 passengers at a time, this new terminal, located in the Zayed Port, marks a major landmark for cruise tourism in Abu Dhabi. 205,000 cruise visitors in 112 vessels are already scheduled for this season, 2015-2016, which is a fivefold increase compared to the first cruise season of 2006-2007. Officials expect this figure to increase by at least 15,000 next season to 220,000 cruise passengers in 117 vessels (2016-2017). Longer term growth projections anticipate that figure to reach 300,000 passengers in 130 vessels by 2019-20. Swiss-based cruise line MSC Cruises will be the first cruise line to use the new terminal as its home port for the 2015-16 season. The following season, it will be joined by Celebrity Cruises.

Development of the cruise tourism industry is part of a plan to significantly boost tourism in the emirate traditionally seen as second to Dubai as a tourist destination. In 2006, Sheikh Mohamed bin Zayed Al Nahyan, Crown Prince of Abu Dhabi, mandated the development of a long-term economic plan to increase the non-oil share of the emirate’s GDP. Known as the Economic Vision 2030, the year by which predictions suggest Abu Dhabi’s baseline growth assumptions could achieve economic diversification, the plan focuses on finding tangible solutions to boost tourism and leisure. Sultan Ahmed Al Jaber, Minister of State, said: “By working closely with our strategic partners and building the necessary infrastructure we hope to expand Abu Dhabi’s tourism sector and reinforce its position as a major global destination.”

As part of the Economic Vision 2030 plan, in 2006 Abu Dhabi also formed the Tourism Development and Investment Company (TDIC), a body intended to drive development of the tourism industry. Capitalizing on blue seas, sand dunes, and UNESCO world heritage sites, the TDIC is currently working on more than 55 projects across the emirate which are all set for completion by 2020. Building projects include multi-use complexes, business and leisure resorts, and desert resorts. One of its flagship developments is Saadiyat Island, where branches of the Louvre and the Guggenheim are currently being built, and expected to open towards the end of next year. Two championship golf courses, environmentally-friendly resorts, new hotel developments, and luxury residential developments to house 160,000 residents are also underway.

The Abu Dhabi International Airport is also undergoing expansion in order to increase its capacity to 45 million. The new, high-tech 700,000 square meter Midfield Terminal Building, set to open in 2017, has been designed to process 19,000 bags per hour on a 22 kilometer baggage handling system and to utilize a new check-in system that can automatically verify mobile and printed boarding passes, improve security, and lower waiting times.

These projects will join the Yas Island development, Abu Dhabi’s $40 billion man-made destination island, which is home to the Ferrari World theme park and the $1 billion Yas Marina circuit, the most expensive F1 track ever built, which hosted the first Abu Dhabi Grand Prix in 2009.

Tourism up in Abu Dhabi

The strategy is already seeing some success. Abu Dhabi’s most recent summer season saw a 21% rise in the number of visitors compared with the previous year. The most significant growth came from Indian visitors, up by 29.8% year-on-year, and Saudi Arabian visitors, up 28% year-on-year. Visitors from the US also grew a significant 24.4%. And visitors from Europe grew 18.1%, with the United Kingdom and Germany contributing to the bulk of the increase. The figures mean that this year Abu Dhabi will exceed 4 million visitors for the first time. Sultan Al Mutawa Al Dhaheri, acting executive director of the Abu Dhabi Tourism and Culture Authority (TCA), said: “We are hugely encouraged by number of visitors who came to the emirate, not only from across the GCC but from around the world”.

The TCA will continue to focus on attracting tourists from India, a drive which this year saw a promotion office opened in India’s capital Delhi to increase passengers of Cruise Arabia, a voyage touring Dubai, Abu Dhabi, Bahrain, and Muscat. The TCA is also focused on attracting tourists from China. This year, more than 20 Abu Dhabi hotels, shopping centers, and tourist destinations enrolled in the China National Tourism Administration’s “Welcome Chinese” program to learn about providing services for Chinese travelers such as Mandarin-speaking staff and payment services for China’s UnionPay bank cards. The TCA has also led a delegation of Abu Dhabi travel suppliers, including representatives of Hyatt Hotels and Resorts and The Ritz-Carlton Abu Dhabi, to Korea and Japan. And looking toward the African market, the TCA will open an office in South Africa this coming year.

The Middle East looks to tourism

Abu Dhabi’s tourism aspirations are part of a burgeoning trend in the region. Dependent on oil for around 50% of GDP and suffering from high unemployment of the young, Saudi Arabia has begun investing in a number of programs to develop heritage sites, museums, tourist accommodation, and tourism infrastructure. A report by the Saudi Commission for Tourism and National Heritage (SCTNH) confirms: “Tourism represents the second most important economic sector in the Kingdom. Despite its low contribution to the gross domestic product (GDP) of only 2.7 percent, development plans in tourism show its ability to raise its contribution to higher levels, and makes it more capable to develop targeted areas especially the rural and remote areas that need comprehensive economic development to create jobs and investment opportunities.” The global Travel and Tourism Competitiveness Report currently ranks Saudi Arabia as 64th in the world. This in fact puts it ahead of many of the more traditionally tourist-focused countries in the Middle East: Tunisia is 79th, Egypt is 83rd, and Lebanon is 94th.

Qatar is also looking to boost tourism to diversify its economy; 2013 tourism figures were up 8.3%, but it still lags behind most of its neighbours. The Qatar Tourism Authority (QTA) has set a goal of attracting 7.4 million visitors by 2030, and has pledged to spend billions in developing new tourist attractions and training more hospitality workers. And Dubai’s Department of Tourism and Commerce Marketing (DTCM) is also busy implementing Dubai Vision 2020, a program designed to double the number of tourists from 10 million in 2012 to 20 million by 2020, and boost tourism’s share of GDP to $81.7 billion.