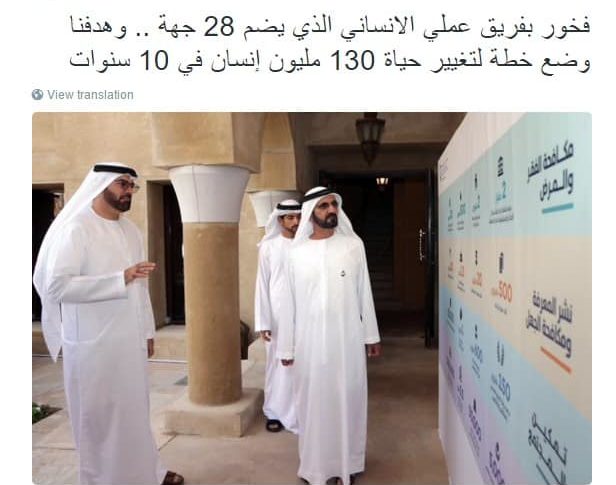 The pioneering ruler of Dubai is conquering a new frontier – social media.

Sheikh Mohammed bin Rashid Al Maktoum has built a global social media following of millions of people and he is using social channels to connect with his citizenry and beyond.

Known for being the force behind Dubai’s rapid development as a major global business and air transport hub as well as for his love of horse racing, Mohammed, 66, has been Emir of Dubai and Vice President and Prime Minister of the United Arab Emirates since 2006.

In recent years, the ruler has encouraged his countrymen to embrace social media as means to connect with young people and encourage innovation. “The significance of these (social media) channels lies in their ability to reach out easily to all members of the society through personal devices,” he said at a Social Media Influencer Summit, which he convened in 2015 to discuss legislation to insure the “best use of social media platforms.”

“It is our duty to help our young people and future generations by building a knowledge platform to protect them from any destructive and negative thoughts that affect their full potential and create constructive paths for Arab societies,” he said.

Mohammed has initiated a number of discussions on social media about issues facing the country and the world.

“We want every man, woman and child to join us in the biggest ever national brainstorming session to find new ideas for health and education,” he tweeted in 2013. “Education and health concern all of us, so I invite all of UAE society to think collectively of creative solutions.”

In 2015, during Ramadan, he used social media to launch a UAE Water Aid campaign to provide clean drinking water to people in poor countries. “Statistics show that 3.4 million people die every year because they lack clean drinking water,” Sheikh Mohammed said on Twitter. The campaign raised nearly $50 million in a month.

Mohammed also posts frequent updates on both Twitter and Facebook describing his activities, which often focus on the need to develop the country and its young people.

One recent Tweet showed a photo of him meeting with students. “I had the pleasure today of meeting a group of students of the Mohammed bin Rashid school for communication. Positive and ambitious and persevering,” he tweeted.

“I told them constant communication with the people and listen to them … and the removal of barriers with them is the most important characteristic of a successful leader and media also successful,” he said in a follow up tweet.

Another has a photo of Mohammed in the cockpit of an airplane with the tweet: “UAE carriers have 530 aircraft worth $160 bn on their order books. UAE is a major growth driver for global aviation.”

UAE carriers have 530 aircraft worth $160 bn on their order books. UAE is a major growth driver for global aviation pic.twitter.com/EP9t9RqFF5

Dubai transformation began in the 1970s

Air transport was a first major step in Dubai’s rapid development and transformation into a major global city starting in the 1970’s.

Mohammad as a young man oversaw expansion of the state-owned Dubai International Airport beginning in 1974. A decade later, he would oversee the launch of Emirates airline, which has become the largest airline in the Middle East and a strong competitor in the global airline industry.

Under Mohammed’s leadership, Dubai has become the air and financial hub of the Gulf. After he lifted a ban on foreign land ownership in 2002 and allowed the creation of special economic development zones, Dubai was able to attract significant development and multinational companies flocked to state.

According to his LinkedIn profile, Mohammed’s “vision for the UAE has been proven successful through achieving unprecedented rankings on global indexes and has lately achieved number one worldwide for government efficiency, according to IMD data.”

More recently, it says, Dubai has developed as a humanitarian center.

“The UAE is not just a financial and economic nucleus, neither is it just a tourism hub: we are also a nerve centre of a global humanitarian work.” These words of Sheikh Mohammed physically manifest in the many charity and humanitarian foundations established by HH (Mohammed), which are major local and international players providing assistance and opportunities to the less fortunate around the globe.

With an estimated net worth of $4 billion, he is also a well-regarded poet and has published books on leadership.

On social media, however, his focus is on governance and using new technologies to improve Dubai and its people.

“The world is moving at a very fast pace and technology is evolving dramatically. We all remember how the traditional media emerged modestly but it quickly gained momentum driven by technology to become a force that impacted governments, changing the course of their work. It transformed the world into a small village.”