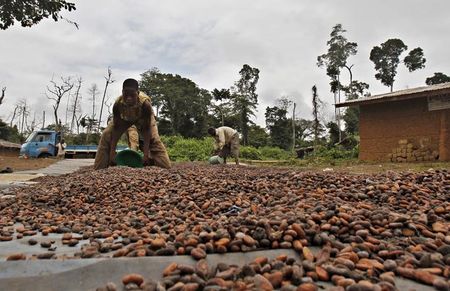 SAN PEDRO, Ivory Coast (Reuters) – The early arrival of intense seasonal Harmattan winds in Ivory Coast’s cocoa growing regions have raised concerns among exporters, who were already harbouring doubts over the size and quality of this season’s main crop in the world’s top producer.

The Harmattan’s dry, dusty winds blow down from the Sahara each year and can, when strong, lead to reduced bean size. The prolonged overcast conditions they create also make it difficult for farmers to properly dry and ferment harvested cocoa, reducing quality.

Farmers reported the arrival of the seasonal phenomenon in Ivory Coast’s growing regions in early December, weeks earlier than expected.

“Output was already down. We already knew that. But the fact the Harmattan has arrived so early and is so strong is really going to complicate the overall picture for the harvest,” said the director of an Abidjan-based export company.

Following a strong start to the 2015/16 season, arrivals to ports in Abidjan and San Pedro have declined gradually in recent weeks and fell behind last year’s levels according to exporters’ most recent estimates.

“Arrivals will increase a bit but will remain below last year’s volumes. We’ll have 50,000 to 60,000 tonnes per week until January and around 30,000 tonnes in January,” said a San Pedro-based purchases manager.

Ivory Coast brought in a record harvest of around 1.8 million tonnes last season. However, the International Cocoa Organization (ICCO) already predicted in October a global supply deficit of around 96,000 tonnes this season, partly on the back of a significant drop in Ivorian production.

Exporters said that if the currently harsh Harmattan conditions persist, or even worsen, that deficit could grow.

“If this carries on, we risk an even greater impact on the harvest, but on quality as well,” said a second exporter.

The bulk of Ivory Coast’s cocoa is produced during the October-to-March main crop, with the most intense harvesting typically taking place in November and December.

“The Harmattan’s effects will be harsh from December until the end of January and that will clearly have an impact on bean quality. We worry about high (free fatty acid) content and poor fermentation during that period,” a third exporter said.