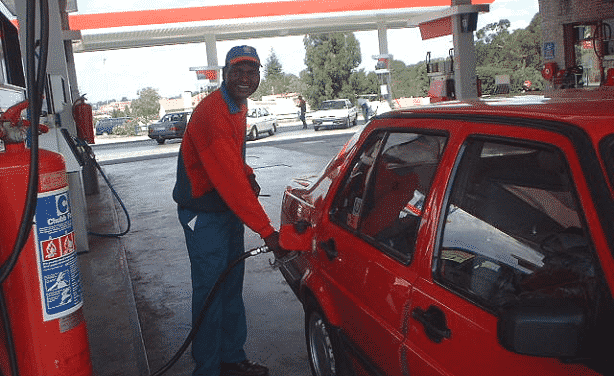 FillApp is the latest in apps aimed at saving consumers money by notifying them of real-time price fluctuations. This South African smartphone application lets users know the best times and locations to fill up their gas tanks based on their car size, make, model and fuel type.

The South African rand lost more than 26% of its value in the last 6 months of 2015, crushing citizens’ ability to participate in the global market. This devaluation was intensely felt across all sectors, particularly those involving global goods such as gasoline. As the rand fell (and continues to fall), South Africans are paying the price at the pump. Despite the fact that oil prices are plummeting to new lows, South Africans were not feeling the same relief as, say, Americans. This is because their currency was falling faster than the price of petroleum.

Recognizing the need to alleviate this financial burden, the South African tech company TouchFoundry created FillApp, an app for Android and iPhone platforms that allows users to save money at the pumps. Users simply input basic metrics about their vehicle, such as make, model, tank size, gasoline type and whether the driver is more likely to fill up at coastal or inland cities.

Based upon these metrics, the app is able to calculate an individual driver’s savings if she should fill up on a certain date. The app then sends each user a notification at the beginning of each month letting them know if they should fill their tanks sooner rather than later based upon the predicted price changes.

FillApp calculates these fluctuations based upon publicly available information from government and agency websites. Co-founder Lance Jenkins says that “every-day people aren’t able to access this data efficiently and conveniently when they need to. So, we did the time, crunched the code and came out with an elegant product that will hopefully add a touch of convenience to everyone’s lives.” Jenkins is referring more to the intellectual accessibility of information rather than the physical availability: the information FillApp uses to make its predictions is readily available to anyone with internet access, but it is taking the time to understand what the data means and how those numbers will be applied to the real world that takes time.

The Department of Energy recalculates fuel prices to include taxes and levies at the end of each month, and the South Africa Central Energy Fund uses this information to update fuel-price predictions on a daily or weekly basis. The Department of Energy puts these new, comprehensive prices into effect on the first Wednesday of each month. As soon as FillApp learns of the new price predictions, they are able to advise users on when and where to fill up their tanks based upon the information previously provided.

These sources allow the FillApp to provide up-to-date fuel price predictions based upon national agencies’ publications. “We scan reliable sources and we then basically get an algorithm that gives us a prediction of what the fuel (price) will probably be,” said Fabio Longano, TouchFoundry’s founder.

Taking Back the Purchasing Power

It is publicly sourced apps like this that are helping consumers take back the power in a world that seems impossibly confusing and unpredictable. By empowering consumers with knowledge about when and where to fill their tanks, FillApp is giving South Africans the information they need to potentially save a great deal of money.

As OPEC (Organization of Petroleum Exporting Countries) has allowed oil prices to fall thanks to a flood in the market, South Africans (and most others) have experienced relief at the pumps. Unfortunately, gas prices seem to be particularly unreliable in South Africa: Reuters predicts that the price of gasoline will go up by 12 cents to 12.74 rand/liter, or about $3.20/gallon. The current price of gasoline in America is, for instance, between $1.99-$2.65, depending upon the state. This means there is substantially more of a burden upon South African gasoline consumers than upon American: not only is the price of gasoline about a full dollar more per gallon in South Africa than in America, but given the massive differences in average income, the high price of gasoline takes up a larger proportion of a South African’s income than it does an American’s. This is not unusual, however. The United States is known for having low taxes on gasoline and usually has much lower gas prices than developing countries.

While South Africans’ relief at the pump has not been as intensely felt as in other countries, FillApp is increasing consumers’ ability to make informed decisions about when and where to purchase gasoline. Apps like this are popping up all over the world, and give a fascinating look at the future of capitalism in a world with increasing income gaps.