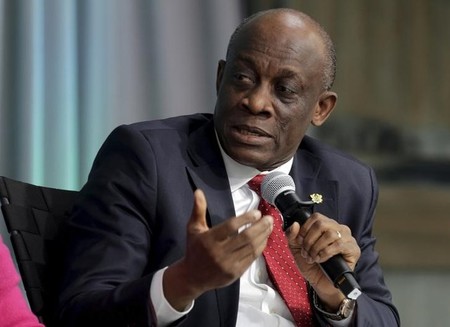 ACCRA (Reuters) – Ghana is on target to halve its fiscal deficit this year after its $918-million aid deal with the International Monetary Fund, Finance Minister Seth Terkper said on Wednesday.

His comments appeared designed to allay uncertainty over the deal that emerged this month when parliament rejected a key component that was designed to promote fiscal discipline. The following day the government suspended a planned Eurobond issue.

The government issued a bill to eliminate central bank financing of the budget deficit in line with the requirements of the deal but on Aug. 2 parliament passed the bill with an amendment allowing financing of up to 5 percent.

Ghana’s public debt eased to 63 percent of GDP in May from 72 percent at the end of 2015, while consumer inflation dropped to 16.7 percent in July from 19 percent in January, Terkper said, citing the impact of the deal that began in April 2015.

The central bank expects inflation to slow to 8 percent, plus or minus two, by September 2017.

“We are set to halve the deficit from 12 percent in 2012, and we have also started stemming the rate of growth of the public debt,” he told a meeting of private businesses in Accra.

Ghana, which exports cocoa, gold and oil, signed the assistance programme to bring down inflation and the budget deficit and stabilize the currency.

Terkper said the debt stock could rise marginally to 65-66 percent of GDP on planned disbursements towards the end of the year but will remain below 70 percent.

Ghana pulled out of a planned five-year $500 million amortising Eurobond this month because investors demanded a yield higher than the single digits the government had expected.

Terkper led the government finance team on the deal and said his team only suspended pricing of bids.

“We did not call off the 2016 bond …. What we did was to suspend pricing …. We must sometimes hold our nerves when we’re in the capital market to look for the right window before we strike in order to get the best results,” he said.

Ghana will on Thursday begin pumping oil from a second offshore oil field, Tweneboa-Enyenra-Ntomme or TEN, in addition to its flagship Jubilee production which began in late 2010.