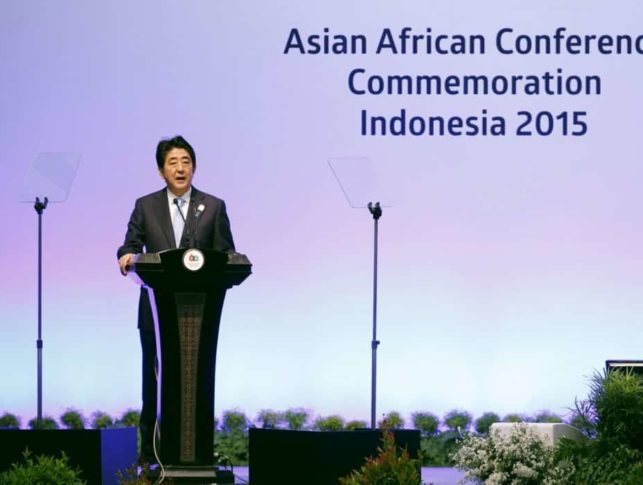 In the 1930’s, Africa was a fast growing market for Japan. It switched its wool supply from Australia to South Africa in 1937 and generally caused friction with traditional trading partners such as the UK and Australia, whose exports were being replaced.

Fast forward to the early 1970’s after the oil shock. Japan became concerned that mineral resources might be the next world shock. Keidanren sent a large mission to Africa around 1970 and tried to develop a large copper project. Japan was trying to limit western domination of Africa in fear that this could put it at a disadvantage in terms of mineral supplies.

During the African independence movement, Japan set up diplomatic relations with the newly established independent African nations, but MoFA was initially cool towards African anti-colonialist movements, and described the African National Congress as a ‘terrorist organization’ in 1982.

The Tokyo International Conference for African Development (TICAD) was launched in 1993. Its intentions were to try to position Japan as an altruistic donor of aid to Africa. But were their intentions more complicated? Most believe this conference was launched to help Japan improve its image in Africa, since it had been closely associated with colonialist and racist regimes in the past.

In 1993, the TICAD was at the height of Japan’s diplomatic efforts towards Africa. By the second TICAD in 1998, however, Africa was already disappointed that Japan was not matching its words with its actions.

The total amount of Japan’s ODA (official development assistance) to Africa peaked in 1997 and has halved since then. Although the share going to Africa has risen (from around 10-15% in the late 1990’s), the absolute amount going to Africa has declined. Japanese foreign aid still tends to have strings attached so that the money is spent with Japanese companies or other Japanese organizations.

Another factor affecting Japan’s diplomacy towards Africa is that China has become increasingly dependent on Africa’s natural resources. China became a net oil importer in 1993. China’s trade with Africa is now six times as large as Japan’s, and the gap is likely to widen further.

Trying to avoid competing directly with China in African diplomacy, Japan is pitching itself with a different angle – its main interests being ODA, human rights, anti-corruption initiatives etc. The intention is to appeal less to governments and more to civil society.

Formerly the world’s top donor to developing countries, Japan now holds fifth place. The decline has been steady due to a long depression of its economy. The 2011 earthquake also required cuts to ODA. Nevertheless, not only was Africa spared, but its share of ODA has increased over the years. Now, a push is on to re-establish strong ties to African countries again.

Japan’s current focus, seen by many as a strengthening of business ties and the boosting of private sector investment, actually represents a changing development agenda, one which sees a move from the position of donor to business partner. But image is still important to the Japanese government.

Africa : an opportunity for major growth for Japan

In Prime Minister Abe’s press conference in Addis Abeba, he addressed Japan’s dual interests with a “soft diplomacy”: “Japan possesses technologies that can contribute to growth in this region, including towards the development and improvement of roads and ports. Japan can also make useful contributions in improving living standards, including in food and health. Africa presents an opportunity for major growth for Japan as well. On this trip, I have asked the heads of nearly 30 companies, universities, and other organizations to accompany me from Japan. Japan has long extended support for teaching girls how to read and write, and for establishing facilities of vocational training, such as sewing. ‘So that each individual, one by one, can earn incomes on their own.’ There are countless women who left the nest, escaped poverty, and became independent thanks to these facilities.If women have active roles in society, there is no doubt that Africa will achieve further growth. To build an ‘Africa in which women shine,’ Japan will continue to proactively support these efforts.”