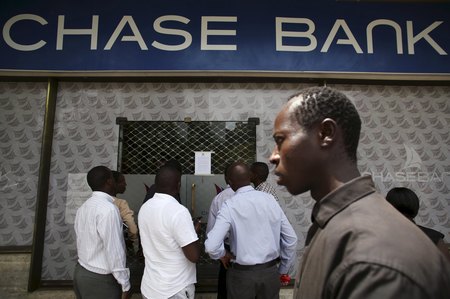 Chase Bank Ltd. in Kenya is reopening its branch offices and resuming online and mobile banking services this week as the troubled financial institution seeks to emerge from receivership with new management and a new majority owner.

The bank was abruptly closed by Kenyan regulators in early April after its chairman and managing director resigned because an audit revealed that the bank had loaned $80 million to its own directors and had allowed its bad debts to rise to $100 million.

Chase is the country’s 11th largest bank with assets of $1.4 billion. Chase has more than 40 branches and 100,000 customers. It is a mid-sized bank and has a mix of low and middle-income customers. Chase also operates Islamic banking services for wealthy business customers who trade with companies in the Middle East.

Chase, the third Kenyan bank to falter in less than a year, had reported a profit of $23 million in 2014 but recorded a loss of $7 million last year.

The bank was closed on April 7 after hundreds of panicked customers made a run on the bank based on rumors of problems on social media, according to the Central Bank of Kenya, which took control of the bank after financial discrepancies emerged.

The Central Bank of Kenya said in a statement that Chase “experienced liquidity difficulties” and was not able to meet its financial obligations after panicked customers began making large withdrawals.

Chase is the third Kenyan bank to be placed in receivership because of liquidity problems and questions of mismanagement within the past year as regulators have stepped up scrutiny of the country’s financial institutions.

Dubai Bank, a small institution, was taken over by regulators in August and Imperial Bank, a midsize financial institution, collapsed in October. Police in March also ordered the arrest of the chief executive officer and five other executives at a fourth bank, National Bank of Kenya, where an audit was scheduled.

Central Bank governor Patrick Ngugi Njoroge has tightened regulatory control on the nation’s banking industry since he took office in July. Earlier this year, Njoroge ordered a moratorium on new bank licenses until an investigation into the health of the country’s banks is complete.

Too many banks for population size

Bank consolidations are likely going forward as Kenya has an oversupply of financial institutions.

Kenya, with a population of 40 million and a $61 billion economy, has more than 40 banks. By comparison, Nigeria, with more than four times the population and an economy nine times as big, has 22 banks.

One banker said the central bank should force banks into “arranged marriages” to winnow and stabilize the banking sector. Banks that refuse should lose their licenses, according to John Gacora, managing director of Kenya’s NIC Bank.

Hoping to calm pubic fears, Njoroge said the central bank would offer support to any bank that suffered liquidity problems through no fault of its own.

Njoroge said he hoped the Chase re-openings also would restore public confidence in the country’s banking system, which he said was stable in spite of problems at the four banks.

The central bank cited KCB’s reputation as a strong bank with long experience in Kenya in favoring the larger bank’s acquisition of Chase.

Opening Chase under the management of KCB “will improve the profile of the troubled lender by capitalizing on the sound reputation of KCB,” said Eric Munywok, an executive at Sterling Capital. “If KCB wasn’t involved, a lot of depositors might have fled.”

Financial experts said Chase customers would be well served by KCB Group, which would gain as well.

Maurice Oduor, an investment manager at Cytonn, said the main question is whether clients will stay with the bank following the scare in early April. “Clients may go away unless KCB ups its game in client service.”

The new management has a year to demonstrate it can emerge from receivership, In the meantime, the central bank has placed a moratorium on payments to Chase creditors of Chase Bank until the new team comes up with a plan for dealing with the bank’s debts.