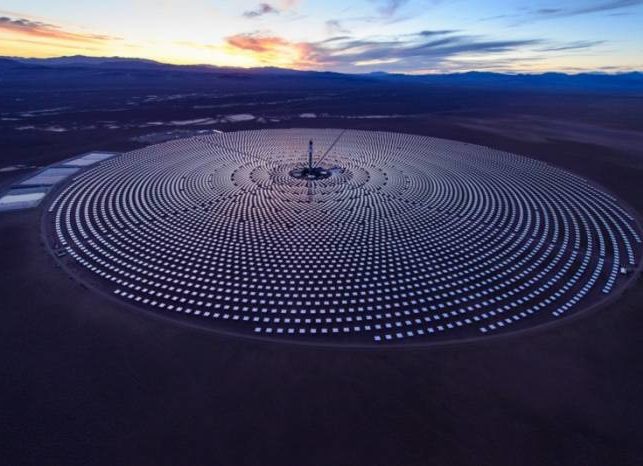 King Mohammed VI switches on Morocco’s first solar power plant that is set to provide over a million homes with power.

The edge of the Sahara desert, just 12 miles outside of the city Ouarzazate is now home to a glittering spectacle that is set to be the world’s largest solar power plant.

After beginning construction on May 10th, 2013 the project has succeeded in completing stage one of its epic operations. Covering a spans the size of 35 football fields, the 800 rows of 500,000 crescent-shaped solar mirrors make up Noor I. This is the first of a complex of four linked solar power plants that once completed in 2018, will finally occupy a site larger than the country’s capital, Rabat, which is home to 1.4 million people.

Instead of utilizing the more familiar photovoltaic panels that are now a common sight on rooftops around the world, ‘the door of the desert’ site uses mirror technology which despite being less common and more expensive, has the advantage of continuously producing power even after the sun has gone down.

As NASA’s Kathryn Hansen explained, “The system at Ouarzazate uses 12 meter-tall (39 foot-tall) parabolic mirrors to focus energy onto a fluid-filled pipeline. The pipeline’s hot fluid is the heat source used to warm the water and make steam. The plant doesn’t stop delivering energy at night time or when clouds obscure the sun; heat from the fluid can be stored in a tank of molten salts.” 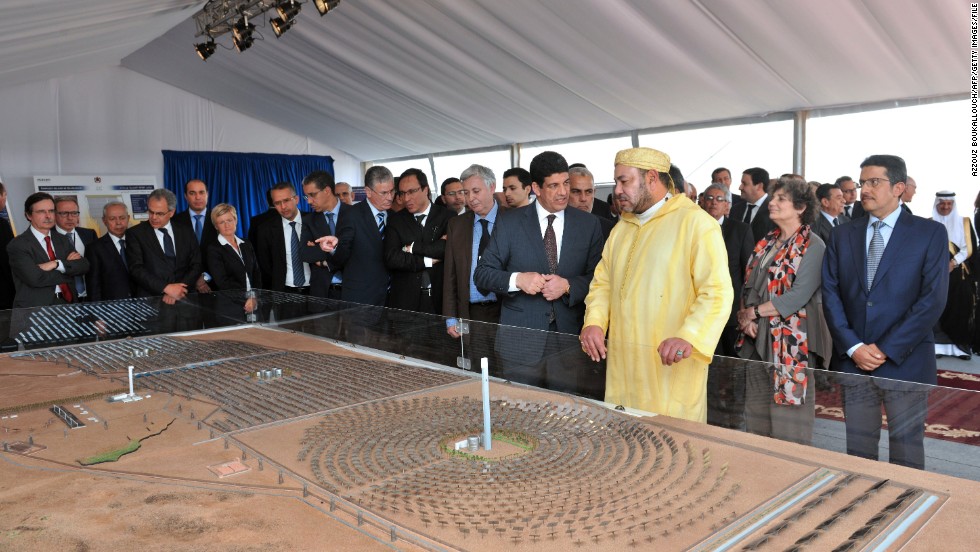 On Thursday 4th February, 2016 the plant welcomed royal guest King Mohammed VI to inaugurate the countries first ever solar power plant. The ceremony was attended by the head of government, members of the government and foreign officials, including French Environment Minister Ségolène Royal who said it inspired, “great hope to all countries with a lot of sun and desert” to produce solar energy.

As the opening took place construction works commenced on the plants Noor II and Noor III sites, while for Noor IV, a call for tenders was opened. Once completed the full complex is expected to provide 1.1 million homes with power.

The king is said to be confident in the immense capacity his country has to offer renewable energies, from the Atlantic wind to the Saharan sun.

It is hoped that for a country who has no claim to fossil fuel, this will be its opportunity to become self-sufficient. Additionally it plans to enter onto an international platform, providing fuel for countries worldwide. No small fry for a country that has been the biggest importer of fuel in North Africa, the venture will bring both economic and geopolitical value.

As Morocco’s Minister of the Environment Hakima el-Haite recently highlighted, “We are not an oil producing country. We import 94% of our energy, which has serious consequences for our state budget. We also have the weight of fossil fuel subsidies, so when we heard about the potential of solar power, we thought, why not?”

The country has pledged that 42% of its electricity will come from renewable energy by 2020. By 2030 they vow to have decreased their CO2 emissions by 32%, a commitment made as part of the climate conference in Paris (COP 21) that Morocco is determined to honor.

As the official hosts of this year’s COP 22, Morocco is setting a precedent with the huge investment into renewable energy. However, they are by no means new to the fight against climate change. In fact since the 1960’s Morocco has shown a firm dedication to protecting the planet with a dams, agriculture and water strategy, followed more recently in 2008 by the energy strategy.

By investing in what it has, Morocco is investing in the future of its people and more far reaching, in the future of the planet. The added bonus being that by extricating itself from major financial outgoings it allows money to remain within the country and the possibility of exporting becomes very real, as more and more countries look for alternatives to fossil fuels. Could Morocco become one of the world’s biggest suppliers? Only time will tell but one thing is for certain, as Thierry Lepercq, CEO of the Paris-based Solaire Direct, acknowledged, “Solar is a true revolution,” and Morocco is at the forefront of that revolution.