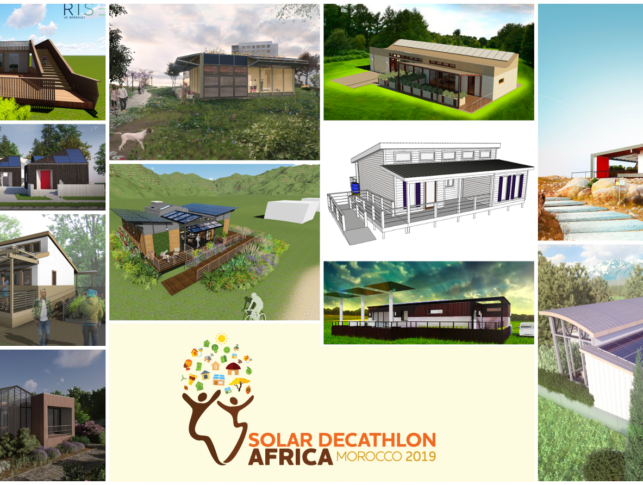 In a time where climate change is a phrase on many people’s lips, it is heartening to see renewed efforts to find ways to use renewable energy in our daily lives. One such effort is The Solar Decathlon Africa, first held in Morocco in September, 2019. The principal idea behind the contest is for international collegiate teams to build a house – judged over 10 categories – that is solely powered by the sun. The contest is modelled on the original Solar Decathlon held every second year in the U.S. since 2002.

The contest has expanded from America, with Solar Decathlons now held in Europe, China, Latin America and Caribbean, and the Middle East, as well as this new one in Africa.

To Design and Construct a House That Uses Zero Net Energy

The inaugural African competition, held in Ben Guerir in Morocco’s central Rehamna Province, took place from September 13th to the 27th, 2019. With more than 1,200 entrants from 20 countries, the competition is not only international but is also underpinned by international cooperation as many of the teams comprised members from more than one country.

The idea is to design and construct a house that uses zero net energy. That is to say, the whole house must be powered by renewable energy, in this case solar. Teams are judged over the following 10 categories, with each category offering 10 points to be won (architecture, engineering and construction, market appeal, comfort conditions, appliances, sustainability…).

There were two primary organisers of the competition in Morocco. The first was IRESEN; a research organisation and institute founded in 2011 by the Moroccan Ministry of Energy, Mining, Water and Environment, and which cooperates with several of Morocco’s key energy companies. The second organiser was Ben Guerir’s University Mohammed VI Polytechnic. The jury consisted of 27 members, chosen from a wide range of fields including education and business and representing several countries.

One factor all teams were asked to incorporate into their designs was recognition of Africa’s cultural and architectural heritage. With harsh conditions across the continent, building design has often evolved to recognise this challenge and to include features which protects inhabitants against these climactic factors. A good example of this is the narrows streets and thick-walled houses found in Morocco’s Medina which keep the heat out at the height of summer and in when the winters get cold.

The Inter House Winner of the First African Competition

The winners of this first African competition were the Inter House Team, a multidisciplinary cooperative effort between Colorado’s School of Mines, Marrakech’s National School of Architecture, and Cadi Ayyad University, also from Marrakech. They used CSEBs (Compressed Stabilised Earth Blocks) as their primary building material for the house walls, comprised of 95% local soil and 5% lime cement to stabilize the blocks. Not only do these CSEBs reflect the traditional brickwork of Morocco, but they also provide work for locals while offering a sustainable and energy efficient building material.

One thing the team wanted to achieve was the marriage of modern and traditional values and styles. Taking inspiration from the famed courtyards which often form the heart of Moroccan homes, the team also made the courtyard the centre of their design. As well as offering a private outdoor space, the courtyard divided the home in two, with sleeping areas to the northwest and living and dining areas to the southeast.

But, of course, the main idea behind these designs was to be energy efficient, a real challenge in the local climate. The house’s CERV (conditioning energy recovery ventilator) utilised a highly efficient heat pump that exchanged energy between the incoming supply and the outgoing exhaust air. Combined with the CSEB walls used, this system not only keeps the house full of fresh air, but also monitors air quality throughout the house using special sensors. The system also allows occupants to monitor and set the home’s VOC (Volatile Organic Compounds) and CO2 levels as well as temperature and humidity levels.

The home also features a state of the art HACS (Home Automated Control System) that allows the homeowners to not only monitor several environmental aspects of the home’s interior but also to control things such as lighting, window shades, etc.

Power for the house comes from two types of solar panels. The first is a rooftop system that supplies most of the house and the second is a solar thermal system to supply renewable hot water. The way the system was designed using heat transfer eliminates any need for boilers or electric pumps.

One of the most innovative features of the winning design was its constructed wetland, a specially designed and built black water filtration system. The water filters through rocks and plants where natural bacteria remove or breaks down any toxins or pathogens. This not only sustains the plants in the filtration system but also provides water to use for landscaping or irrigation.

An Increasing Level of Cooperation across Borders and Between Diverse Organizations

With increasing worry over a changing climate, it is encouraging to see not only innovative ideas in creating energy efficient homes, but also the increasing level of cooperation across borders and between diverse organizations. While the homes in the competition, complete with all their technological gadgetry, are mainly aimed at middle class buyers, many of the ideas will be able to be incorporated into lower income homes in the future.