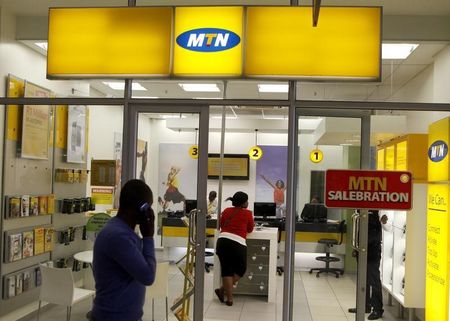 The Nigerian Communications Commission (NCC) imposed the penalty on Monday on MTN’s Nigeria unit, the group’s biggest market by subscribers, sending the phone operator’s stock tumbling by about 20 percent this week, though they bounced 2 percent by midday Friday.

The fine comes months after Muhammadu Buhari swept to the helm of Africa’s biggest oil producer after a campaign in which he promised tougher regulation and a fight against corruption.

The telecoms regulator said MTN failed to disconnect subscribers with unregistered or incomplete SIM cards, after ordering all network operators to do so. NCC said only MTN had failed to comply with the directive.

An NCC source has said the regulator’s decision was based on advice from Nigeria’s state security service, which suspected unregistered SIM cards were being used for criminal activity in a country facing Islamic militant group Boko Haram’s insurgency.

NCC spokesman Tony Ojobo said MTN had until Nov. 16 pay up, but the two sides were in talks to resolve the matter.

Nigeria’s presidency and internal security agency were also involved in the talks, a regulatory source said. MTN Chief Executive Sifiso Dabengwa flew to Abuja to make what three sources familiar with the matter said was an attempt have the penalty reduced.

If it stands, the fine, almost a quarter of Nigeria’s 2015 budget of $22 billion, would wipe out more than two years of MTN’s annual profits.

It was unclear what would happen to MTN, whose Nigerian license is up for renewal in 2016, if the company fails to pay the fine, but NCC’s powers include revoking licenses.

Some analysts said the size of the fine risked damaging Nigeria’s efforts to shake off its image as a risky frontier market for international investors.

“Why this over-reaching regulation? It simply adds to perceptions about Nigeria as unfriendly place for foreign capital,” Vestact fund manager Sasha Naryshkine said in Johannesburg.

But Frost & Sullivan analyst Joanita Roos said the move helped, rather than damaged, Nigeria’s image. “The harsh action taken by regulators … does in fact protect and contribute positively to the reputation of the country.”

MTN also faces a Johannesburg bourse investigation on the timing of the announcement that it was facing the penalty. MTN’s confirmation came after news reports of the fine. South African companies are required to immediately disclose any price-sensitive information.