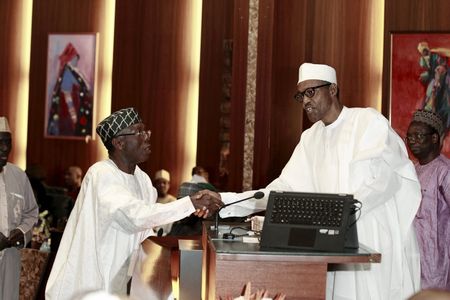 ABUJA (Reuters) – Nigeria hopes to reach a deal with China within weeks to set up 40 rice mills, its new agriculture minister said, as part of plans to eliminate the need for any imports of grain within two years.

President Muhammadu Buhari, who took office in May on a campaign to usher in a new era for a country hit by corruption and mismanagement, wants to boost the agricultural sector and end reliance on oil exports after a plunge in crude prices.

That will be an uphill challenge as pot-holed roads hamper the transport of goods. Nigeria has tens of millions of farmers but the vast majority of them work on a subsistence basis and live on less than $2 a day.

As a first step, the new government hopes to reach by year end a deal with China to import equipment to build rice mills, Ogbeh said late on Thursday.

“The federal government plans 40 mills with the Chinese spread across the country, each capable of milling 100 tonnes per day,” Ogbeh said.

He declined to give more details on the talks, which began under the previous administration led by President Jonathan. Chinese state media and a Nigerian government document obtained by Reuters have said the oil producer was talking to China’s state Import and Export Bank.

He said Africa’s biggest economy had a similar goal for cashew and cocoa, while the government also wanted to ramp up farming of soy beans, groundnuts, bananas and tomatoes within the next three years.

But it still needed to import 2.3 million tonnes of rice in 2012  — a record high, according to the latest U.N. statistics which also show some 4.1 million tonnes of wheat was brought into Nigeria in the same year – nearly double the amount imported in 2000.

Ogbeh said he also had plans to improve Nigeria’s position as the world’s fourth largest cocoa producer by planting at least two million cocoa trees – in 27 of the country’s 36 states – annually for the next three years. The minister said the same number of cashew trees will be planted over that period.

To attract more young people into farming, the new government plans to retain a policy it inherited, through which farmers could receive central bank loans at a rate of 9 percent, as opposed to borrowing from commercial banks at around 18 per cent.

The prospect of little financial reward has led to the average age of a Nigerian farmer rising to around 65, said Ogbeh, since many young people find the work unappealing.

He also said he was in talks with the minister of education to allocate at least an acre of land to each of some 12,000 students at the country’s three agriculture universities during their studies to gain farming experience.