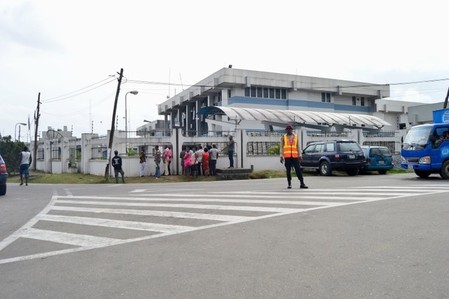 LAGOS (Reuters) – Nigeria’s central bank has replaced the chairman and chief executive of Skye Bank after it failed to meet minimum capital ratios, its governor said on Monday.

The central bank said Skye Bank’s non-performing loan ratio has been above the regulatory limit for a while and it hadmet with Skye’s board to resolve the issue, governor Godwin Emefiele told a briefing.

Earlier, banking sources told Reuters that Skye’s chief executive Timothy Oguntayo had resigned before the central bank announcement. He was the head of Skye Bank when it bought nationalised lender Mainstreet Bank in 2014.

“The basic issue is capital adequacy and liquidity. From what we see, adequacy ratio in the bank has been weakening and we don’t want it to get to a point where depositors will be at risk,” Emefiele said.

Skye Bank is designated as one of Nigeria’s systemically important banks due to the size of total sector deposits it holds after the acquisition of Mainstreet Bank. This means it has to hold more capital.

Emefiele said the central bank had conducted a stress test and decided to replace the chairman, chief executive and all non-executive directors after they failed to recapitalise the bank.

He said Skye had been a net borrower from its rediscount window for “sometime.” The central bank also appointed Tokunbo Abiru from rival First Bank to head Skye Bank.

“(Skye) bank is not in distress and remains able to continue banking activity,” Emefiele said.

Nigeria’s central bank has powers to remove bank executives and used them during the 2008/2009 global financial crisis when it sacked nine CEOs at banks which were undercapitalised.

Last year, the regulator gave three commercial banks until June 2016 to recapitalise after they failed to hit a minimum capital adequacy rate of 10 percent.

Skye Bank has been in talks with shareholders and new investors to raise 30 billion naira ($150 million). It suspended plans for a rights issue last year due to weak market conditions.

Emefiele said the overall banking industry was sound, despite weaknesses in the economy but that none of Nigeria’s 21 commercial lenders were in distress.