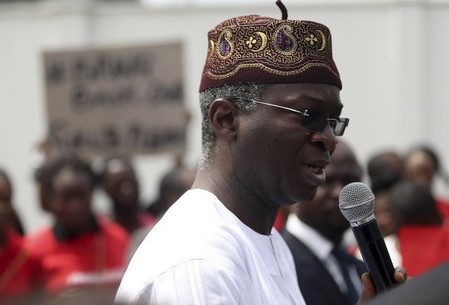 LONDON (Reuters) – A Nigerian minister said on Friday the government had paid contractors 63.16 billion naira ($200 million) to finish delayed infrastructure projects, in an apparent bid to ease fears over the future of the schemes meant to boost the struggling economy.

Work on a series of road, power and other programmes had slowed or halted as the government struggled to make payments, amid delays in passing the national budget and foreign currency shortages.

Power, Works and Housing Minister Babatunde Fashola told an infrastructure conference in London that “63.16 billion naira have been paid out to contractors to finish infrastructure projects since the budget” was passed in May.

He did not say whether that covered all the outstanding payments. But the comments will come as a relief to contractors, many of whom were not paid for months.

They will also signal to foreign investors that there is some movement in the supply of money, which has been problematic over much of the last year due to foreign currency curbs introduced to conserve forex supplies.

The 6.06 trillion naira ($19.24 billion) budget tripled capital expenditure from the previous year in a bid to stimulate Africa’s biggest economy which is going through a crisis caused by low oil prices.

Nigeria’s economic development has been held back by erratic electricity provision and a poor road network, all of which falls under Fashola’s remit.

It was not clear whether the funds referred to by Fashola were part of the budget allocation.

Earlier this month the budget minister said Nigeria’s first quarter revenues reached only 55 percent of the government’s target due to recent attacks on oil and gas facilities in the southern Niger Delta energy hub.