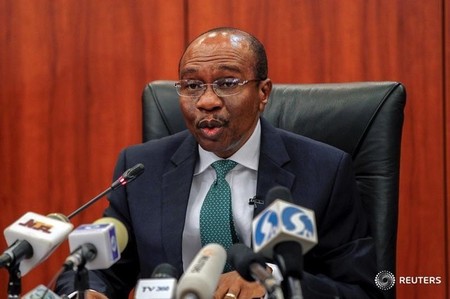 ABUJA (Reuters) – Nigeria’s central bank said on Wednesday it would begin “purely” market-driven foreign currency trading next week, abandoning its 16-month peg and setting the stage for the naira to fall sharply.

Nigeria’s central bank previously pegged the naira at 197 to the U.S. dollar but the currency trades at about half that on the black market as slump in oil revenues has hammered public finances and foreign currency reserves. The new trading rules begin on Monday, Central Bank Governor Godwin Emefiele said.

The change of tack is a “managed float” and puts Nigeria in line with most central banks, including the Bank of England, a senior central bank official told Reuters. Nigeria’s central bank has no target for the naira, he said.

The latest interbank level will be posted on the central bank’s website daily from Monday, the official said, adding: “The old rate of 197 does not exist anymore.”

Following the announcement, three economists estimated the fair value of the naira between 280 and 300 against the dollar, although the black market rate is around 370.

Nigeria, Africa’s largest crude exporter, has resisted devaluing its currency for more than a year despite other major oil producers, including Russia, Kazakhstan and Angola, allowing currences to fall amid lower crude prices.

The central bank will still be able to inject dollars into the market, giving it some control over the exchange rate within the limit of its foreign reserves which fell to $26.7 billion in June, from $42.8 billion in January 2014.

With a likely sharp fall for the naira, Nigerian products will become relatively cheap and imports more expensive, which should stimulate the domestic economy but also lift inflation.

“To improve the dynamics of the market, we will introduce foreign exchange primary dealers who would be registered by the CBN (central bank) to deal directly with the bank for large trade sizes on a two-way quote basis,” Emefiele told reporters.

“This is a major about-turn. The central bank has traditionally favoured a managed rate and preferred a strong currency to contain inflation,” said Gregory Kronsten, head of macroeconomic and fixed income research at FBN Capital in Lagos.

“It seems the CBN is eager the market captures forex from remittances (international money orders) as well as FDI (Foreign Direct Investment),” he said.

The central bank said eight to 10 primary dealers would supply the interbank market with dollars, handling minimum volumes of $10 million.

The primary dealers will be allowed to sell back 70 percent of any dollars bought from the central bank on the day of purchase. Sales must be backed by a specific customer order to avoid currency speculation, the central bank said.

Retail currency operators will not be able to buy from the interbank market, meaning dollars will remain in scarce supply for private individuals and small businesses.

Emefiele also said the central bank would open a foreign exchange futures market to ease demand on spot trading, reduce volatility and give businesses the opportunity to hedge risks.

Africa’s biggest economy, which contracted by 0.4 percent in the first quarter, faces its worst crisis in decades after the decline in oil prices and last year’s introduction of a currency peg that prompted a large-scale capital flight.

“Over the long run, a weaker currency will help Nigeria’s economy by encouraging import substitution and attracting foreign investors, who have shunned the country for fear of a devaluation,” Capital Economics’ John Ashbourne said.

“But the move will be painful over the short term. Higher import prices will add to inflation … This will probably force the authorities to tighten monetary policy.”