Nigeria to review mining licences as part of industry overhaul 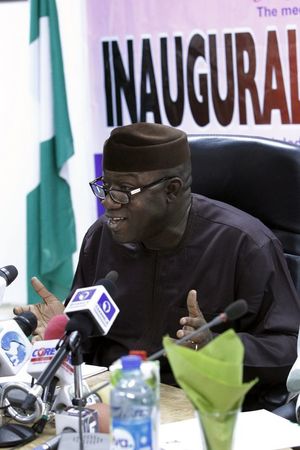 ABUJA (Reuters) – Nigeria will review all its mining licences as its wants to overhaul a largely unproductive sector dominated by artisan miners, the mining ministry said on Monday.

The West African nation wants to lower dependency on oil production as crude prices tumble and boost output of solid minerals that contribute only 0.34 percent to GDP, according to official data.

Africa’s largest economy has some gold and iron deposits but little seismic data exists as the government has focused on oil exploration in the past decades.

To make a sector 80 percent dominated by artisan miners more efficient, mining minister Kayode Fayemi said all licences would be reviewed by March 1, according to a statement.

“We will work with stakeholders to review existing licenses and bring them up to date where there are issues,” he said in the statement, his first policy comments since taking office last month. “The period from today to 1st March 2016 should be considered an amnesty period to allow regularisation of papers.”

He said Nigeria had 44 known minerals including gold, iron ore, bitumen, zinc, tin and coal but authorities needed to get better data before deciding on a policy focus.

Nigeria has attracted few foreign investors to the mining sector due to a lack of roads, corruption and weak regulation.