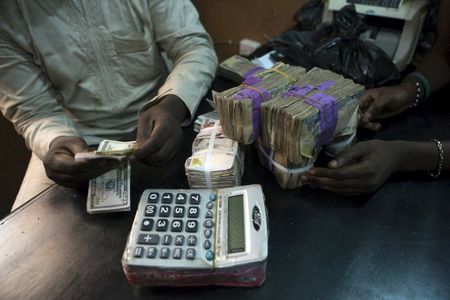 LAGOS (Reuters) – Nigeria’s overnight lending rate eased marginally to 0.75 percent on Wednesday from 1 percent in the last five weeks after the central bank refunded cash set aside by banks to buy dollars.

Traders said the impact of the refund and anticipated injection of additional cash from November budgetary allocations to states and local government also helped to reduce cost of borrowing among banks.

However, the secured open buy-back (OBB) — the rate at which lenders can borrow from the interbank market using treasury bills as collateral — held flat at 0.5 percent it has traded in the last five weeks, far below the central bank’s benchmark rate.

Traders said about 300 billion naira additional funds are expected from the budget disbursal before the close of business on Wednesday.

They said although market liquidity dropped to around 230.5 billion naira on Wednesday from 400 billion naira on Friday, it was expected to rise again helped by the refunds and possible budget disbursals.

“We expect the cost of borrowing to stay flat for the rest of the year as most businesses wind down and tidy their books for the financial year ending,” another dealer said.