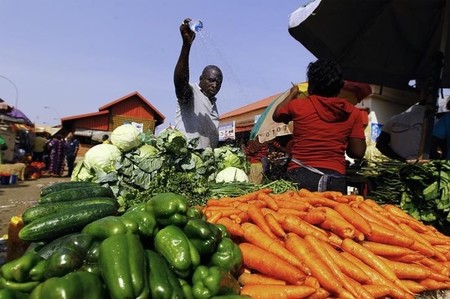 LAGOS (Reuters) – Nigeria’s annual inflation rose to a near four year high of 12.8 percent in March from 11.4 percent in February, driven by a rise in food prices, the National Bureau of Statistics said.

Africa’s biggest economy is facing its worst economic crisis in decades fueled by the collapse in crude prices, which has slashed government revenues, weakened the currency and caused growth to slow. The economy grew 2.8 percent last year, its slowest pace in decades.

Food prices, which account for the bulk of the inflation basket, rose by 1.4 percent points to 12.7 percent in March, the bureau said on its website.

“The higher price level was reflected in faster increases

across all divisions,” the bureau said in a report.

The NBS expects inflation to end the year at 10.16 percent, above the central bank’s target upper limit of nine percent. The price index ended at 9.55 percent last year.