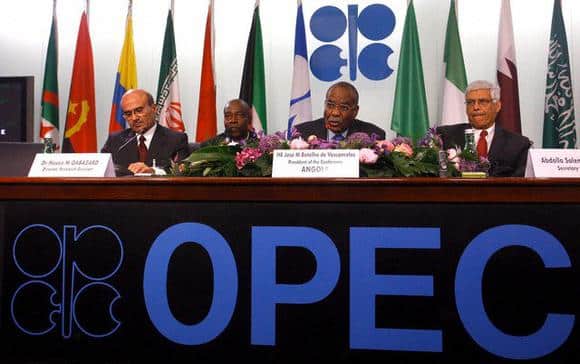 In spite of growing climate concerns and plummeting oil prices, the world’s largest oil cartel has rejected limits on pumping crude oil in the coming year.

The move by the Organization of Oil Producing Countries (OPEC) virtually guarantees a continuing glut of oil along with low prices at the gas pump. Low prices could further undercut U.S. production shale oil production in 2016.

Meeting December 4, 2015 in Vienna, Austria, representatives of OPEC’s 13 member countries debated whether to cut crude production, currently about 31.5 million barrels a day, in an attempt to prop up prices.

Growth in demand is cited

In a statement following the meeting, OPEC acknowledged the oversupply but emphasized potential growth in demand next year.
“ The Conference observed that global economic growth is currently at 3.1% in 2015 and is forecast to expand by 3.4% next year. In terms of supply and demand, it was noted that non-OPEC supply is expected to contract in 2016, while global demand is anticipated to expand again by 1.3 mb/d (million barrels per day),” the OPEC statement said.

The failure to impose limits followed a fractious discussion within OPEC. The Vienna meeting, scheduled to last four hours, was extended to seven as members debated whether to continue a year-old policy of oversupply.

The prevailing faction, led by Saudi Arabia, the cartel’s largest producer, wants to pump at current levels despite the risk of even more price reductions. Other members, such as Venezuela and Algeria, want to cut production in an attempt to bolster prices.

OPEC member countries produce about 40 percent of the world’s crude oil and their exports represent about 60 percent of the total oil traded internationally, which has enabled the cartel to influence oil prices, according to the U.S. Energy Information Administration.

That was evident as the U.S. benchmark rate for oil declined 2.7 percent to $39.99 a barrel on the day of the OPEC meeting.

Saudi Arabia says it wants to protect its market share. But some analysts say Saudi Arabia wants to pump more oil in order to slow down shale oil production in the United States, leaving OPEC producers to fill the vacuum as demand grows. Shale oil is significantly more expensive to produce so these producers are even harder hit by lower prices.

A U.S. slowdown is already happening. According to Baker Hughes North American Rig Count for the week of December 4, 2015, there were 737 active rigs in the United States compared to 1,920 rigs a year earlier.

Meanwhile, OPEC production is likely to increase beyond the current 31.5 billion barrels a day.

A new reality for OPEC

Historically, OPEC has been able to bolster prices by squeezing production. But in November 2014, Saudi Arabia blocked calls from poorer OPEC members to cut production in hopes of halting the slide in prices. At that time, the price of oil was slightly more than $71 per barrel.

“It is a new world for OPEC because they simply cannot manage the market anymore. It is now the market’s turn to dictate prices and they will certainly go lower,” Dr. Gary Ross, chief executive of PIRA Energy Group, said at the time.

OPEC also welcomed the re-entry of Indonesia into the cartel after a six-year absence. The country is the fourth smallest producer of OPEC’s 13 members.

While declining to set limits on crude production, the OPEC ministers did discuss the United Nations Climate Change Conference that was ongoing in Paris at the same time.

The discussions “stressed that climate change, environmental protection and sustainable development are a major concern for all of us,” the OPEC statement said.

Efforts to reduce carbon emissions could place large oil producers in even more of a bind if governments in the climate talks move to reduce dependence on oil in favor of sustainable energy sources.