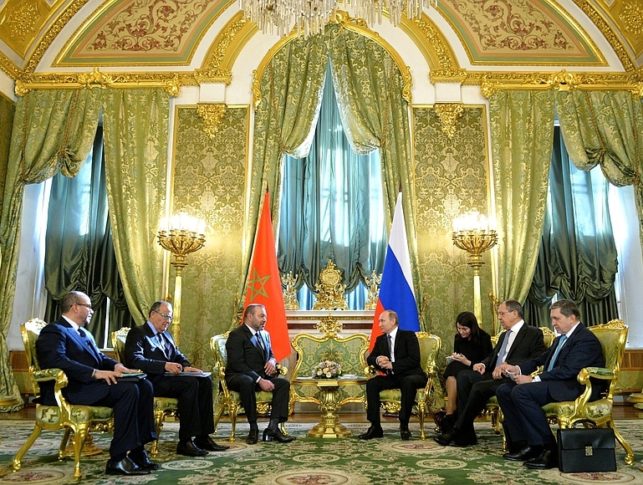 Russia and Morocco are known for their mutual respect concerning diplomacy and economic issues since the late 18th century. The Sultan of Morocco, Mohammed III, and Russian Empress Catherine II exchanged letters in areas of mutual interest, including establishment of commercial ties, and allowing Russian boats to have access to Moroccan shores for fishing. Mohammed III then invited a Russian representative to come to Morocco for further talks.

The relationship between Russia and Morocco underwent an evolution in the 19th century, and Russia established a Consulate in Tangiers in 1897. The Russian diplomat Vasily Romanovich Bakherakht arrived in Morocco in May of 1898. Morocco became the first Arab country that Russia established diplomatic ties with, and remained so until the October Revolution.

In November of 1955, the Kingdom of Morocco became an independent state, and the Soviet Union recognized its independence in July of 1956. Diplomatic ties were re-established in September of 1961. Since that time, the connection between Russia and Morocco has been robust, in spite of many economic and political changes that both countries have experienced in the 20th and 21st centuries.

An increasingly strategic alliance between Morocco and Russia

In the past five to ten years, there have been significant indications leading to increasingly close ties and cooperation between Russia and the Kingdom of Morocco. Their international involvement with the global community has experienced uncertainty echoed in circumstances and events affecting both countries. Economic sanctions placed on Russia and the evolution of debate over the Moroccan Sahara are other factors explaining the increasingly strategic alliance between Morocco and Russia.

Morocco’s stronger inclinations towards relations with Russia have often been pointed out by government officials, either through direct meetings or official statements. In several speeches, King Mohamed VI has officially declared the intentions of Morocco to strengthen cooperation with Russia in trade, tourism, and investment. On July 30, 2014, the 15th anniversary of Mohamed VI’s coronation, the Monarch announced his country’s commitment to advancing stronger bonds with Russia. King Mohamed VI

On Tuesday, March 15th, 2016, King Mohamed VI met with Vladimir Putin at the Kremlin and signed six binding agreements and several memorandums, framework agreements, and protocols that deepen ties between the two countries.

– Extradition between Morocco and Russia.

– Air services between the countries.

– Cooperation covering environmental protections and use of natural resources.

– The promotion and reciprocal protection of investments.

– A mutual protection of classified information on military and military-technical matters.

– A Moroccan-Russian declaration on the fight against international terrorism.

The memorandums, framework agreements, and protocols cover an understanding on:

–  Cooperation in the field of energy.

–  Cooperation in geological research and exploration of the subsoil.

–  An understanding between the National Health Security Office of foodstuffs (ONSSA) of the Ministry of Agriculture and Maritime Fishing (Morocco) and the Federal Agency for Veterinary and Phytosanitary Surveillance (Federation Russia) plant health of plants and plant products.

– Cooperation between the Ministry of Endowments and Islamic Affairs of the Kingdom of Morocco and the Central Religious Organization (Shura Council of Muftis of Russia).

– A framework partnership agreement with the National Foundation of Museums and the Museums of the Moscow Kremlin.

– And a protocol for the exchange of information on moving goods and vehicles between Morocco and Russia.

The two country’s Declaration on their deeper strategic partnership also called for strengthening the central role of the United Nations in its fight against global terrorism, transnational organized crime, criminal corruption, and other challenges.