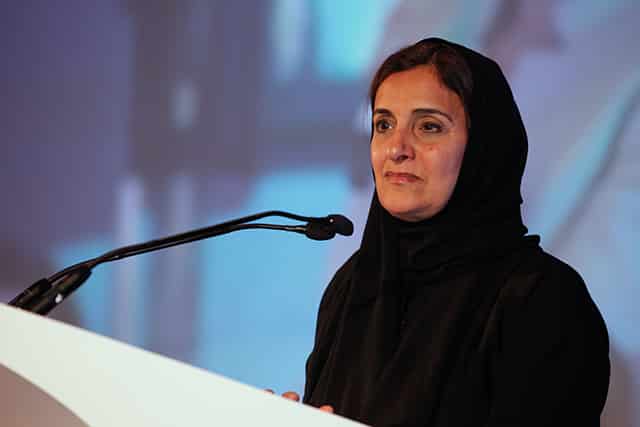 Sheikha Lubna Al Qasimi’s more than decade-long political career began with the groundbreaking distinction of being the first woman appointed to a ministerial office in the UAE.

CEO Middle East magazine has ranked United Arab Emirates’ Minister of International Cooperation and Development (MICAD, also called the Ministry of Tolerance), Sheikha Lubna Al Qasimi, the most powerful Arab woman for the sixth year in a row. The first woman to hold a government ministerial position in the UAE, Sheikha Lubna’s long political career has enabled her to rise through the ranks of a male-dominated society.

A member of the ruling party, Lubna is the niece of his Highness Dr. Sheiki Sultan bin Mohammand Al Qasimi, the current ruler of the Sharajah Emirate and a member of the Supreme Council of the UAE. Before her political career took off, Sheikha Lubna studied in the United States, where she received her Bachelor’s Degree in Computer Science before undertaking her MBA with the American University of Sharajah.

Becoming the Most Powerful Arab Woman: Education, Family and Positions of Power

CEO Middle East magazine creates its ranking of 100 powerful Arab women based upon the number of lives each woman has touched. With more than a decade in political office, Sheikha Lubna’s position of power has enabled her to create and inform UAE policies, impacting the lives of millions.

Her professional career includes a litany of impressive feats across business and financial sectors: in 2000, she became the CEO of Tejari, the first business-to-business e-market place in the Middle East; acted as the head of the Dubai e-Government executive team and was responsible for instituting initiatives throughout Dubai’s public sector in 2004; and Sheikha served as the Chairperson of the board of Directors of the UAE’s Securities and Commodities Authority from 2004-2008. In addition to her MBA, Sheikha Lubna has three Honorary Doctorates: Law and Economics from in science, from California State University (Chico), in Law, from the University of Exeter (United Kingdom) and in Economics, from Hankuk University of Foreign Studies (Korea). Honorary Doctorates are given in recognition of contribution to the field, and are usually awarded after an individual and provided a commencement speech or rendered another service to a university.

Moving Up, As a Woman

Sheikha Lubna’s impressive educational, professional and political career would have likely been impossible without her family connections and high standing in Emirati society. That being said, it was due to Sheikha Lubna’s perseverance and persistence that her family allowed her to pursue her academic interests.

“I wanted to be a computer engineer and my dream was to go to the US…It took a lot of [effort] from my brothers to convince my parents to let me go, but I [went to] the UK, and I stayed with a British family. As long as I was within a family environment, it was OK by my parents and eventually I went to the US,” Sheikha Lubna said at the Global Women’s Forum Dubai earlier this year.

Lifting Women along her Journey

Not only does Sheikha Lubna use her position to create positive change for Emiratis, but she is an influential figure for women throughout the Arab world. Her story of academic and professional success is no doubt inspirational for the millions of women who have not had strong female role models.

This highlights the difficulties Emirati, and Arab, women continue to face: Sheikha Lubna is from a very well-respected family, and yet it was her brothers who had to petition her parents on her behalf. When asked why she chose to return to the UAE, where her path would be presumably more challenging than if she stayed lived in a more equitable society, she said “I came back to the UAE because I owed to it to my country and to the leaders, and not many people get such opportunities.”

Sheikha Lubna has been recognized by Forbes and the Wall Street Journal as one of the most influential women in the world, regardless of region. Her sense of duty to her nation and countrywomen is truly remarkable. It has been a challenging road to be the first female minister in the UAE, and her dedication has not gone unnoticed.