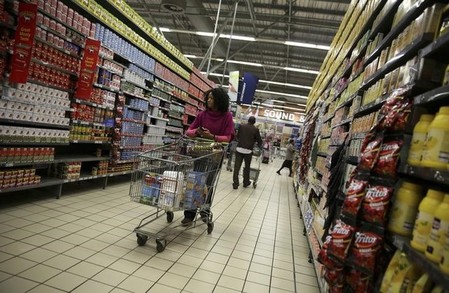 JOHANNESBURG (Reuters) – South African supermarket operator Pick n Pay plans to expand into Nigeria next year through a partnership with a local conglomerate, as it seeks to reduce its reliance on its home market, it said on Tuesday.

Pick n Pay already operates in Botswana, Zimbabwe and Namibia and plans to open new stores in Ghana next year. Like many other South African companies it wants to expand further across the continent amid sluggish economic growth at home.

The retailer, which reported a 26 percent jump in annual earnings on Tuesday, said it would take a 51 percent stake in a Nigerian joint venture with conglomerate A.G. Leventis, which runs a food business. It did not disclose the size of the investment.

“We are not suddenly going to explode onto the scene in Nigeria next year but we are going to start the process of looking at all those things,” Pick n Pay’s CEO Richard Brasher told a results briefing, adding that he was aware of tough trading conditions in Nigeria and would not expand hastily.

Nigeria is Africa’s biggest economy but some South African companies that expanded into the west African country, including Dairy products maker Clover Industries and fashion retailer Truworths, have either pulled out or scaled down due to a scarcity of hard currency to import spare parts and raw materials.

“If you’re in the retail business and you are an African business its hard to ignore Nigeria,” he told Reuters.

“People have realised that Africa is not just going to be a pot of gold at the end of the road, it’s a lot of graft and it’s going to need long-term investment rather than something that happens quickly,” Cape Town-based Beelders said.

Pick n Pay has lost ground in South Africa to rivals such as market leader Shoprite, after failing to invest in new stores. But Brasher, a former UK head of Tesco who took over in January 2013, is implementing a plan to win back market share.

Pick n Pay said headline earnings per share (EPS) rose 26.4 percent from a year earlier to 224.04 cents in the year to the end of February, helped by cost-cutting measures. Headline EPS, a measure that excludes certain one-off items, is the profit figure most widely used in South Africa.

The company declared a final dividend of 125.20 cents per share, bringing the year’s total payout to 149.40 cents, 26.5 percent higher than the previous year.

(By Zandi Shabalala. Editing by James Macharia and Susan Fenton)