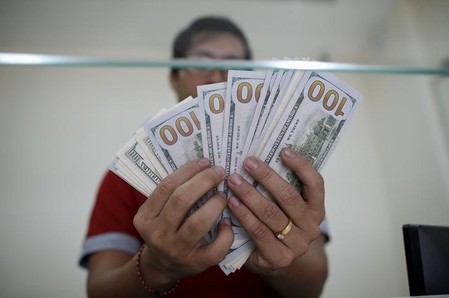 JOHANNESBURG (Reuters) – South Africa has successfully issued a dollar bond overseas to help finance its medium-term foreign currency commitments, the Treasury said on Friday, touting this as a sign of investor confidence despite political upheaval.

Finance Minister Pravin Gordhan has been anxious to reassure investors about continuity in fiscal policy after President Jacob Zuma changed finance ministers twice in less than a week in December, triggering a panic run on the rand.

On Friday, the Treasury said its $1.25 billion 10-year bond, with a coupon of 4.875 percent, had been more than two times oversubscribed, mostly by investors based in Europe and the United States.

“The South African government sees the success of the transaction as an expression of investor confidence in the country’s sound macro-economic policy framework and prudent fiscal management,” it said.

Zuma, who has been dogged by controversy over the past decade, is under mounting pressure to quit after the Constitutional Court found he flouted the law by not heeding a directive to make payments for upgrades to his personal home.

S&P and Fitch both rate South African credit just one notch above junk, while Moody’s is two notches over sub-investment grade.

Analysts said South Africa had benefited from a general rise in demand for high-yielding emerging market assets after the U.S. Federal Open Market Committee (FOMC) signalled it might be a while before U.S. rates rise.

“There was clearly a window here for them to issue after the FOMC reprice and before a wall of downgrades from the ratings agencies,” Nomura analyst Peter Attard Montalto said.

“They have significant forex deposits already so they can probably wait until next year for the next issuance.”

The rand extended gains against the dollar after the Treasury’s statement, climbing to a session high of 15.0155, up 1.5 percent for Thursday’s close.

Government bond prices also rose, sending the yield on the benchmark bond due in 2026 down 8.5 basis points to 9.19 percent.

The coupon for the bond represents a spread of 335 basis points (bps) above the 10-year U.S. Treasury benchmark, which analysts said was in line with South Africa’s current funding rate.

The price compares to initial thoughts of plus 350 bps and guidance of plus 335 bps, plus or minus 5 bps.

“There is always demand for our paper and there will always be demand for EM in general because of the nice yields that it provides,” Rand Merchant Bank trader Gordon Kerr said.

(By Stella Mapenzauswa. Additional reporting by Olivia Kumwenda-Mtambo in Johannesburg and Claire Milhench in London)