Tanzanian entrepreneur aims to light up his country with green energy 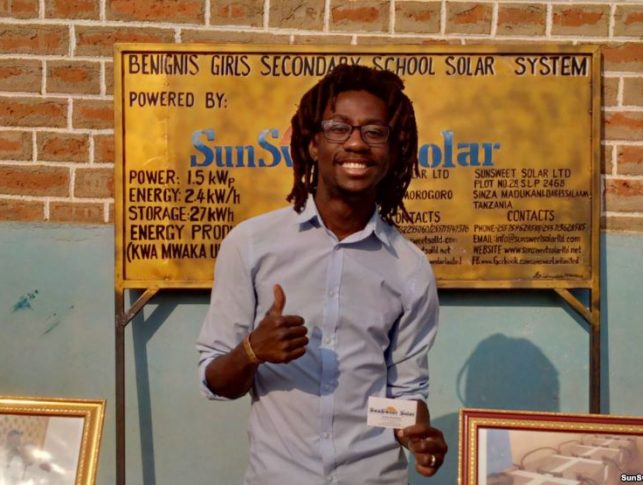 For 70% of Tanzanians, the only way to light up their homes after sundown is with a small kerosene-powered lamp. This shortage of electricity does not only affect people in their homes, but businesses and schools too. It was something that 22 year old George Mtemahanji understood well, as he had grown up in the small, rural town of Ifakara where kerosene was the only option for light after dusk.

Mtemahanji left his home in 2003 at only 9 years of age, as his mother took him to Italy in search of new opportunities. However, 8 years later he returned home, and upon seeing that the same energy problems still afflicted his hometown, he decided to find a solution.

The spark that can change lives

Mtemahanji was not only struck by how little things had changed in his place of birth, but also by how significant a lack of electricity was to the prospects for development. Mtemahanji explained, “Electricity supply is really important for the development of a country. Without electricity, New York or Johannesburg would just be villages – they’d be like Ifakara.”

At the time of his return, Mtemahanji was studying to be a technician in renewable energy, and the power situation within his home town immediately struck him as a problem that his training could help to solve. Mtemahanji said, “We have a lot of sun and it was really very strange that no one was doing something with solar energy.” The inspiration for Sunsweet Solar had been created, so Mtemahanji returned to Italy to discuss his ideas with a fellow student, Manuel Rolando.

By 2013, extensive research into solar energy in Tanzania had revealed that many locals simply did not trust solar energy as a reliable source due to poor quality installations that had proved inconsistent. However, Mtemahanji was confident that Rolando and he were capable of designing efficient, cost effective solar powered systems. The duo began approaching companies for funding, and found a Swiss company planning to build a photovoltaic plant (solar power plant) right in Mtemhanji’s hometown of Ifakara. The two young entrepreneurs offered to design and construct all the technical components of the plant for free, and their pitch was accepted.

Sunsweet Solar rises in the east

Mtemahanji’s voluntary work on the Swiss photovoltaic plant was a huge success; the plant is the largest of its kind in the Kilombero district, and it powers 200 lights, dozens of computers and can store 3 days’ worth of power. Moreover, it now proved to any other investor that Mtemahanji and Rolando had the requisite skills to complete their grand plans.

Mtemahanji was committed to ensuring that his home in East Africa would begin to finally see a rise in solar power, which would drive forward development, and would save money for the poorest people of his country. Sunsweet Solar was registered within days of the completed project in Ifakara, and they quickly established a partnership with a German company, Fosera, to provide household kits to rural districts.

Sunsweet Solar aims to not only build energy solutions for much of Tanzania, but to do so in a way that is cheaper than the current alternative of using kerosene lamps.

Mtemahanji discussed the 70% of the country that have no reliable electricity, remarking, “We can give them electricity for 25 years for only $79… It costs less than $0.30 per month; today a liter of kerosene costs $1.10. That means the people in rural areas spent 73% more with kerosene per month than with our solar system.”

Access to electricity can bring greater productivity in the workplace, and the ability to improve education. Since Sunsweet Solar installed solar power to Benignis Girls Secondary School, the school has seen exam performances increase from 18% to 83% in just 1 year. Something as simple as being able to study during the evening is a part of life that many people will have never had to consider.

In 2015, George Mtemahanji won the Anzisha Price, an award for young African entrepreneurs, and despite his success he is still only 22 years of age. With plans to roll out a loan system, so that customers can buy installations in installments, the future for both his company and Tanzania looks increasingly bright.