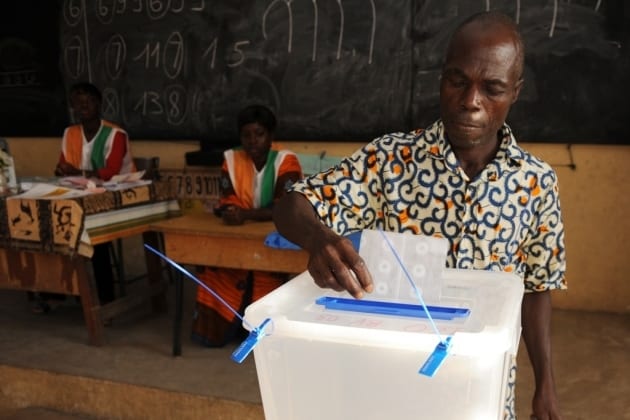 Former President Gbago, has the distinct dishonour of being the first head of state detained by the International Criminal Court. Just days after the election, President Gbago will be tried by the International Criminal Court at The Hague. The court claims that his antagonising role in the five-month-long post-election violence, which left more than 3,000 dead, qualifies as a crime against humanity. Court documents supplied by the defense claim that Gbago suffers from Post-Traumatic Stress Disorder (PTSD) and an unspecified ailment. It would be unsurprising if both of these are cited as reasons he cannot fully participate in his trial.

The ICC has requested that Simone Gbago, former first lady of Cote D’Ivoire who is currently serving a 20-year sentence in Cote D’Ivoire, be transferred to The Hague so she may be tried by the ICC for crimes against humanity for her role in the post-election violence. The current Ivoirian government has denied the request.

The post-election violence occurred when, in 2010, Gbago refused to give up his place as president following Ouattara’s success at the polls. Like many power-hungry leaders before him, Gbago maintained his victory, albeit by a slim margin. The Constitutional Council declared that Ouattara had received 48.55% of the vote while Gbago had won with 51.45% of the vote. Despite the outcries of international organisations who all agreed Ouattara had won, Gbago’s grip remained firm. After months of unsuccessful negotiations, Gbago ordered military intervention. UN Peacekeeping forces were deployed to protect both Ouattara and Ivoirian citizens. Nearly two months of violent protests occurred before, on December 18th, a United Nations spokesperson said that the UN did not consider Gbago to be Cote D’Ivoire’s rightful leader. Angola and Lebanon were virtually the only international bodies to recognise Gbago’s presidency: the UN, EU, US, ECOWAS and France all confirmed their backing of Ouattara and condemned Gbago’s actions.

By March 2011, more than 3,000 citizens were dead. Ouattara travelled to Ethiopia to meet with the African Union, who were tasked with finding a solution to the bloody conflict. The African Union confirmed Ouattara as the winner. Gbago was arrested shortly after and is currently being held in prison in Scheveningen, a suburb of The Hague, where he will be tried for crimes against humanity. A Glimmer of Hope

For a country with such recent dark history, the forthcoming election is seen as crucial in the country’s road to stability. Cote D’Ivoire was once the world’s top cocoa bean producer and France’s former “star colony.” Like so many francophone post-colonies, Cote D’Ivoire’s recent history has been marred with social upheaval and economic despair.

President Ouattara is basing his campaign for a second term on the economic reform he has implemented as president in the fallout from the 2010 conflict caused by ex-president Laurent Gbago’s refusal to defeat. President Ouattara has promised that he will not seek a third term should he be re-elected come October, a promise that, if upheld, would indicate great social and political progress.

The Candidates and Their Electorate

A total of 33 Ivoirians applied to run for the country’s top job, including Pascal AFfi N’Guessan, the head of former president Gbago’s party, the Ivoirian Popular Front (FPI). N’Guessan is one of 10 candidates listed by the Constitutional Council, alongside Charles Konan Banny and Mamadou Koulibaly, former premier and parliament speakers, respectively.
There are an estimated 300,000 new voters in this year’s election, which will bring the total number of voters to approximately 6.2 million. Cote D’Ivoire’s population is largely young, and eligible to vote, and have grown up without the yoke of colonialism. Their interests lie in economic opportunity, increased employment and better options for their futures. So far, Ouattara has shown that he is a grounding force in a tumultuous country, and shows promise that, if granted another term, would be able to have a truly positive impact on Cote D’Ivoire’s future.