The end of OPEC? 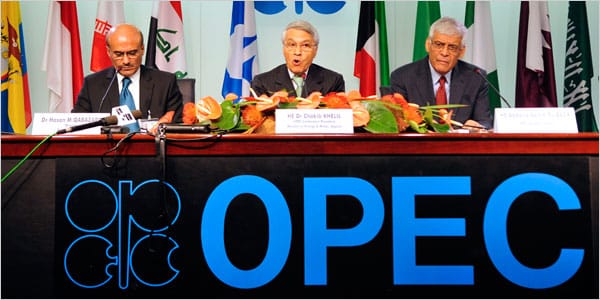 When OPEC ministers once again failed to agree on production limits to bolster oil prices in early June, it was yet another signal that the days of the oil cartel’s dominance in the global marketplace are over.

Members of the Organization of Petroleum Exporting Countries may continue to be important players in world oil markets, but “the cartel has lost its privileged ability to control global oil prices,” according to Global Risk Insights, which assesses political and business risk around the world.

OPEC nations, led by Saudi Arabia, traditionally have been the world’s swing oil producers, with enough reserves and daily production to control the price of oil. But that has changed in recent years as the United States, Russia and other smaller non-OPEC countries increased production.

Despite waning influence, OPEC’s refusal to set production limits has played a major role in creating an oil glut, precipitating a two-year crisis that has seen the price of oil drop to as low as $26 per barrel earlier this year before climbing to $52 this month. That compares to prices of about $110 per barrel in 2014, when the crisis began.

Some OPEC nations, led by Saudi Arabia, have been willing to absorb the financial shocks of plummeting oil prices in order to preserve market share, reasoning that the low prices would drive competitors, notably U.S. shale oil producers, out of business.

OPEC has rebuffed calls to limit production by members Algeria and Venezuela, which have been hard hit by the slump.

Saudi Arabia itself has not been immune to the financial impact of low oil prices.

The Gulf nation has spent more than $150 billion of its reserves in less than two years and posted a deficit of $98 billion last year.

Earlier this year, the Saudis borrowed $10 billion from a consortium of international banks, its first foreign debt in 25 years. The government also was considering asking creditors to take IOUs because it cannot pay its bills.

The OPEC strategy to let oil prices fall in order to wound its competitors has had mixed results, especially in the United States.

While 59 shale oil companies in the U.S. have filed for bankruptcy, production has dropped only slightly because of more efficient production. While financially troubled, the U.S. shale production should be able to rebound quickly once oil prices start rising, perhaps as early as next year.

Deal with Russia falls through

OPEC also came under fire from a top Russian oil executive in the spring, after a proposed deal between OPEC and Russia to freeze output fell through.

Igor Sechin, an ally of President Vladimir Putin, said tensions between Saudi Arabia and fellow OPEC member Iran have undermined the oil cartel. Saudi Arabia and Iran are vying for political dominance in the Middle East, and Iran, freed from Western economic sanctions, has vowed to significantly increase its oil exports.

“At the moment a number of objective factors exclude the possibility for any cartels to dictate their will to the market,’’ Sechin said. “As for OPEC, it has practically stopped existing as a united organization.”

Meanwhile, the Saudis have pledged sweeping economic reforms that signal their intention to go their own way on oil prices.

The reforms aim to diversify the country’s oil-dependent economy by increasing non-oil revenue to $141 billion by 2020. However, Saudi Arabia said it would maintain its output of 12.5 million barrels per day until 2020.

Deputy Crown Prince Mohammed bin Salman said his hope was that in 20 years the country would no longer be oil-dependent. The Saudi kingdom relies on oil for 80% of its revenue.

Saudi Arabia has vast oil reserves and has modernized production at a time when other oil producers including Venezuela and Iran have let their industries deteriorate.

At the OPEC meeting in early June, the Saudi oil minister also alluded to the waning clout of the cartel, saying that the market would determine prices.

“I think managing in the traditional way that we tried in the past may never come again,” Khalid al-Falih. Oil producers should “let the market forces continue to seek and find that equilibrium price between supply and demand.”