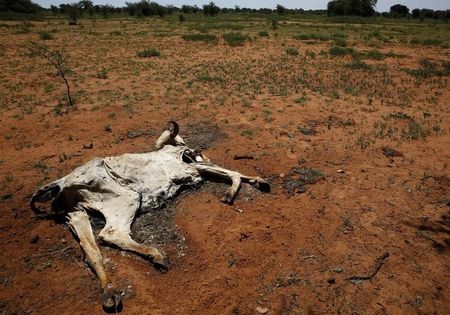 BARCELONA (Thomson Reuters Foundation) – Without action to help farmers adjust to changing climate conditions, it will become impossible to grow some staple food crops in parts of sub-Saharan Africa, with maize, beans and bananas most at risk, researchers said on Monday.

In a study of how global warming will affect nine crops that make up half the region’s food production, scientists found that up to 30 percent of areas growing maize and bananas, and up to 60 percent of those producing beans could become unviable by the end of the century.

“This study tells where, and crucially when, interventions need to be made to stop climate change destroying vital food supplies in Africa,” said Julian Ramirez-Villegas, the study’s lead author who works with the CGIAR Research Program on Climate Change, Agriculture and Food Security (CCAFS).

“We know what needs to be done, and for the first time, we now have deadlines for taking action,” he added in a statement.

For example, the study warns that around 40 percent of maize-growing areas will require “transformation”, which could mean changing the type of crop grown, or in extreme cases even abandoning crop farming.

Sorghum and millet, which have higher tolerance to drought and heat, could replace maize in most places under threat.

But for 0.5 percent of maize-growing areas – equal to 0.8 million hectares in South Africa that now produce 2.7 million tonnes – there is no viable crop substitution, the study said.

In a few places, the need to adapt to climate change is already urgent, the researchers said. Those include pockets in highly climate-exposed areas of the Sahel in Guinea, Gambia, Senegal, Burkina Faso and Niger.

Banana-growing regions of West Africa, including areas in Ghana and Benin, will need to act within the next decade, as the land is expected to become unsuitable for bananas by 2025.

And maize-growing areas of Namibia, Botswana, Zimbabwe and Tanzania also have less than 10 years left to change tack under the most extreme climate change scenarios, the study added.

“If we don’t do anything now, farmers are no longer going to be able to grow certain crops in certain sites,” Ramirez-Villegas told the Thomson Reuters Foundation from Colombia.

“But we know there are several adaptation options … with which farmers should be able to carry on growing these crops for a longer period of time than we project.”

Those options begin with shorter-term actions like improving irrigation and weather information services for farmers, and developing new varieties of maize and beans that can better tolerate heat and drought.

Such measures are already underway in parts of Africa, including the “Drought Tolerant Maize for Africa” initiative that has released 160 varieties, benefiting up to 40 million people in 13 countries.

But governments will still need to re-assess agricultural and food security policies to see whether bigger transformations are needed, such as switching to different crops or livestock.

If so, they will need to help farmers access markets or build processing and storage facilities for new crops.

“Our findings show that time is running out to transform African agriculture. This will require not only increased funding but also a supportive policy environment to bring the needed solutions to those affected,” he said.

A separate study released on Monday, by researchers from Brown and Tufts universities, suggested scientists have overlooked how two important human responses to climate will impact food production in the future: how much land people choose to farm, and the number of crops they plant.

Looking at Mato Grosso, a key soy-producing state in Brazil, they found a temperature rise of 1 degree Celsius was tied to substantial decreases in crop area and double cropping, accounting for 70 percent of the overall loss in production. Only 30 percent was attributable to falling crop yield.

“If you look at yields alone, you’re not looking at all of the information because there are economic and social changes going on as well,” said Leah VanWey, professor of sociology at Brown and one of the study’s senior authors. “You’re not taking into account farmers’ reactions to climate shocks.”