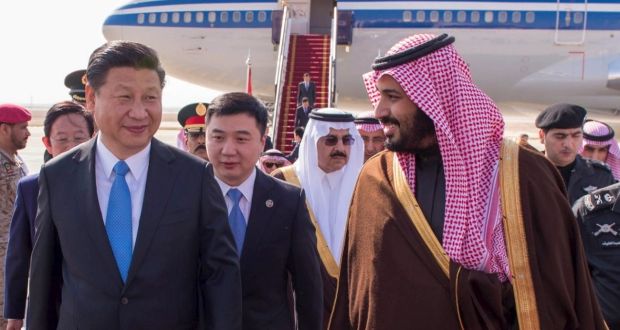 Chinese President Xi Jinping has completed a three-nation tour of the Middle East, as the world’s second-largest economy seeks to strengthen economic and political ties with the region, and promote its status as a rising power to foreign and domestic audiences.

Xi also visited the King Abdullah Petroleum Studies and Research Center, a non-profit institution focused on research in energy economics, policy, technology, and the environment. And he attended the opening ceremony of the Aramco Sinopec Refining Company (Yasref), a joint venture between Saudi Aramco and China Petrochemical Corp (SINOPEC). This venture is China’s largest investment in the region, and looks set to continue to be so, as the two companies signed a framework agreement for strategic cooperation estimated to be worth between $1 billion and $1.5 billion.

After energy deals in Saudi Arabia, Xi then travelled to Egypt to meet with President Abdel Fattah el-Sisi, where the pair signed a five-year outlining document to advance their relationship. The Chinese president also announced his country’s intent to participate in key Egyptian projects, including the development of the Suez Canal Corridor and the construction of a new administrative ­capital.

Xi also announced a $1 billion financing agreement for Egypt’s central bank and a $700 million loan to the state-owned National Bank of Egypt, as he looks to support Egypt’s path to economic prosperity. In total, officials from the two countries signed 21 deals spanning development, electricity, transportation, and infrastructure. In a joint statement, President Xi said: “The total investments in these projects would be $15 billion. These projects will offer a new impetus to the economic development of Egypt”.

Finally, Xi visited Iran; a display of even-handedness in the light of tensions between Iran and Saudi Arabia in recent weeks. The visit also landed just days after sanctions against Iran were lifted, following the UN’s announcement that the country had scaled back its nuclear program. China had been one of the six nations involved in negotiations.

Over recent years, China has been the top buyer of Iranian crude oil and Iran’s biggest trade partner, counting for more than a third of its foreign trade. The lifting of the sanctions will secure the future of that business relationship. Iranian officials confirmed that the country was preparing to raise oil production by 500,000 barrels per day. Iranian President Hassan Rouhani hopes to further boost this relationship, hailing a “new chapter” in relations with China and announcing that the two countries will be building stronger economic ties over the next decade. He comments: “We are happy that President Xi visited Iran after the lifting of sanctions. Iran and China have agreed to increase trade to $600 billion in the next 10 years,” he said. The two leaders also signed 17 agreements in areas including energy, trade, industry, environment, technology, politics, security, and cooperation on peaceful nuclear energy.

During his trip, Xi pledged $55 billion in loans and investments to the Middle East region as a whole, including $15 billion designated as special loans for industrial projects in the Middle East, $10 billion for commercial loans to boost cooperation in the energy sector, and another $10 billion as preferential loans. In this show of economic muscle, he also pledged $300 million to boost China-Arab law enforcement cooperation, and committed a final around $20 billion to setting up a common investment fund with Qatar and the United Arab Emirates. Xi also pledged HK$273.4 million in humanitarian aid for Syria, Jordan, Lebanon, Libya, and Yemen.

But while the tour undoubtedly had significant economic consequences, particularly at a time of economic difficulty and plummeting oil prices in the Middle East, it also seems to be part of a broader Chinese strategy intended to strengthen diplomatic ties with the region. During his trip to Egypt, President Xi delivered a speech outlining China’s new Middle East policy, which included making a commitment to building peace and development in the region, and supporting industrialization and stability. This speech followed the publication of China’s first Arab Policy Paper, a “blueprint for China-Arab mutually beneficial cooperation, [which] reiterates the political will of commitment to peace and stability in the Middle East, in order to promote China-Arab relations to a new and higher level.” It signifies that China will no longer be taking a back seat.

The trip is likely also linked to Xi’s “One Belt, One Road” initiative, a rebuilding of the Silk Road trade routes of the Han dynasty. Xi intends to link China and Europe via Central Asia, West Asia, and the Middle East, with the help of Chinese-funded infrastructure.

And with that many interests to protect, it seems China has good reason to invest more time and money in its relations with the Middle East.