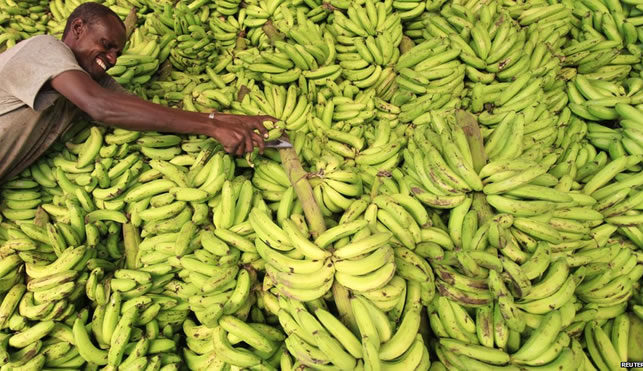 The banana industry is making a comeback in Somalia after two decades of war devastated its leading export.

The East African country’s fledgling effort faces significant challenges, including lack of irrigation and storage infrastructure as well as a wait-and-see attitude of potential export partners abroad who are mindful of Somalia’s recent history of violence and instability.

While most of Somalia’s current crop goes to local markets, exports have begun to Middle Eastern countries including the United Arab Emirates.

Currently, Somalia has about 4,000 acres in cultivation, producing about 40,000 tons annually, according to FruitSome, a company formed by about 100 growers to market Somali bananas abroad.

The current planting is less than 14 percent of the 30,000 acres that were in cultivated when the industry was at its peak. In 1990, before the war began, Somalia was the largest banana exporter in East Africa. Banana exports accounted for about $96 million and produced Somalia’s leading source of outside income.

“Prior to 1991, Somalia was renowned for its thriving banana industry. However, insecurity, lack of inputs, and poor infrastructure, has over the last two decades led to a devastating decline and eventual collapse of banana exports,” according to the Food and Agriculture Organization of the United Nations, which is providing assistance to the Somali banana industry.

Irrigation and production infrastructure destroyed during the war

The military government of Somalia was deposed by rebels in 1991, throwing the country into chaos, especially in the south, where bananas are farmed, and in the capital of Mogadishu. During the fighting, irrigation and production infrastructure was destroyed and banana growers lost access to export markets as pirates operated off the coast of Somalia. Drought and famine exacerbated the hardships in 2011.

An internationally backed central government was installed in 2012 and the nation has slowly become more stable, although insurgents of Al-Shabab, an Al-Qaeda ally, continue to operate in Somalia.

Growers, many of whom fled to refugee camps in neighboring countries, have begun to return to farms they were forced to abandon during the violence.

Lack of refrigerated storage: another challenge

“This place was a bush a year-and-half ago. We cleared the bush and now more than hundred people work here every day,” Omar Osman, a farm manager in Afgoye, said.

In addition to clearing brush and replanting, growers must reconstruct irrigation systems destroyed by fighting factions. Lack of refrigerated storage is another challenge.

The UN Food and Agriculture Organization (FAO) has provided direct food aid to families in Somalia as well as assistance in restoring and increasing food production, including seed and land preparation services as well as farmer training.

The FAO also developed several virus-free banana varieties, and Somali growers chose one, William, that is tolerant to virus attacks and drought. The FAO began making seedlings available to growers in 2012.

But the Somali growers also face skepticism from some quarters. Dole, for example, invested in Somalia in the past. But a representative of the company said “right now it seems difficult to develop any agriculture program in Somalia because of the local situation.”

For now, most of Somali’s bananas are sold in local markets, and livestock has replaced bananas as the country’s leading export. Other exports are fish, charcoal and scrap metal. Export partners are the United Arab Emirates, Yemen and Oman.

Italian colonists introduced bananas to the fertile Shabelle and Juba river valleys of southern Somalia in the 1920s. The industry grew steadily and it peaked in the 1960s. Somali bananas are known for their sweet taste and creamy texture.

FruitSome, the company formed by banana growers in 2012, is looking to increase exports, primarily to Europe and the Persian Gulf.

“Close to a hundred farmers are still registered as members of the banana growers association. They have been hoping to be able to export again but drought, civil war, social unrest and a shortage of irrigation infrastructure has so far made it impossible to revive the industry until very recently when the country has begun to re-emerge socially and politically, supported by international partners,” FruitSome said.

Despite the challenges, the FAO was upbeat about prospects for rebuilding Somalia’s banana industry. “With peace slowly returning to southern Somalia, this makes investment in the banana industry a key priority for FAO and its national and international partners,” the UN agency said.