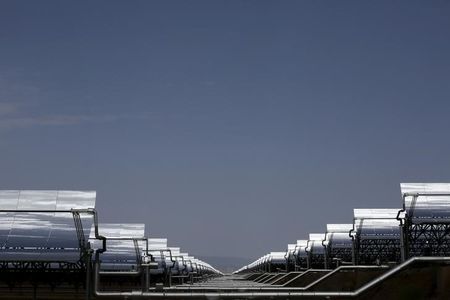 ABUJA (Reuters) – Access Infra Africa has signed a joint development agreement with Nigerian Quaint Global Energy Solutions for a 50 megawatt solar power plant that is expected to provide electricity for over 600,000 homes in northern Nigeria, the partners said on Tuesday.

The west African nation has chronic power shortages due to a dilapidated transmission grid and natural gas constraints while the new generating and distribution companies are still struggling to be profitable since the 2012 privatisation of the sector.

Power output has risen since President Muhammadu Buhari was inaugurated at the end of May, fluctuating at just under 4,000 MW per day over the last few weeks versus just over 3,000 MW under the former administration, according to transmission data. But the level is still far below the country’s needs.

Businesses rely heavily on expensive diesel generators while the average Nigerian must put up with days of blackouts.

The ABIBA plant in northern Kaduna state is expected to be built in the next two years though the partners must still negotiate a Power Purchase Agreement (PPA) with the Nigerian Electricity Regulatory Commission (NERC) before it can seek financing from banks.

Access Infra Africa, a renewable power developer with a presence in 17 African countries, will contribute the bulk of the 30 percent equity put down for the $100 million project.

Quaint has also received a $1.3 million grant from the U.S. Trade and Development Agency for ABIBA.

If successful, the solar farm would be the first in the country and largest such plant on the continent outside South Africa.

Other renewable energy projects became stuck in the PPA phase under the previous administration and stalled due to an unprofitable tariff but the NERC announced a new feed-in tariff at the start of November for renewable projects up to 30 MW.

Buhari has made increasing power generation a priority as better access to power will be key to his goal of diversifying the economy.