Akon Switches On: Turning Fame into Light for Africans 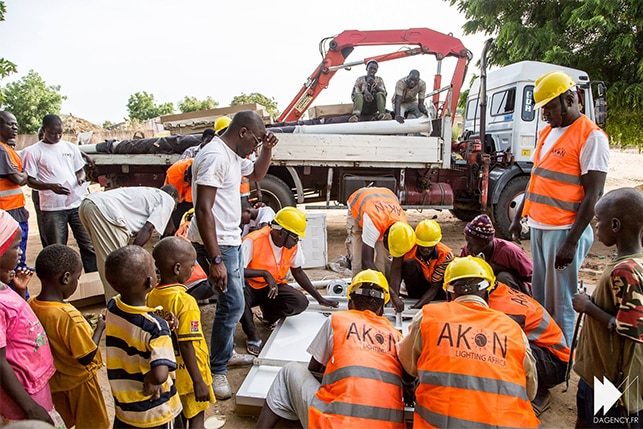 American-Senegalese rap star Akon is putting his fame to use: providing electricity for the millions of people who need it in 15 sub-Saharan African countries.

Rappers may be famous for many things, but philanthropy is not one of them. Akon, the Senegalese-American rapper famous for dance hits like “Smack That” and “I wanna love you”, is changing that perception through his latest business endeavor. Unlike his peers, Akon’s newest business is not a clothing line or new cologne, but the creation of a solar power company. In February 2014, Akon announced that he would be changing the public face of rap by launching his company to invest in capital development for millions of sub-Saharan Africans.

In September of 2013, Akon and his friend and soon-to-be-business partner Thione Niang, were discussing how they could improve their hometown of Kaolack, Senegal. Both had been born and raised in this West African country, in a town without electricity. They decided that infrastructure was a key priority in Senegal’s development, and that electricity was a fundamental key to promoting employment, education and positive change in Senegal and other sub-Saharan African countries. In regions without access to electricity, life slows after dark, and in equatorial countries, darkness falls around 6pm, year round. Light is a fundamental aspect of human activity, and without electricity, families are forced to resort to what can be dangerous alternatives: approximately 3.5 million people die per year from respiratory illnesses related to indoor burning.

Akon and Niang joined forces with Malian entrepreneur Samba Bathily to bring an end to energy poverty in sub-Saharan Africa. They decided that creating a company, Solektra International, would provide a clear path to Akon and Niang’s dreams. Through Solektra International, the three co-founders created Akon Lighting Africa, a for-profit company working to create jobs and stimulate economic growth through sustainable, low-cost electricity.

Going Against the Grain: A For-Profit Company in a Non-Profit Sector

When we think of “helping Africans”, images of smiling do-gooders and the logos of non-profit agencies like the United Nations Development Programme come to mind. Not often do corporate giants like Huawei enter the conversation, but this is exactly the conversation Akon is changing. Akon is working with companies like Huawei, Solektra and Sumec to implement his projects because he “doesn’t believe in aid in Africa.” By using their expertise, Akon Lighting Africa is able to access their enormous network of partnerships to provide low-cost electricity to thousands of Africans. Their projects are provided free-of-charge to the communities they work in from a US$1billion credit line established with various international banks. According to the Akon Lighting Africa website, the average cost of lighting a village is approximately US$75,000, which includes micro-solar grids, personal solar packs for homes, street lights, lights and wiring for educational and health institutions, and the elements needed to connect each light to the grid.

Not satisfied with the status quo that has left billions of humans in the dark, Akon took matters into his own hands when he co-created Akon Lighting Africa. This company “aims to develop an innovative solar-powered solution” for the 600 million Africans without electricity. Akon Lighting Africa works to enable school children to study so they can pass their exams; to increase economic opportunity for small business owners; make roads safer and improve the quality of services available at existing institutions, like health centers and schools; and to ensure better access to information, all while creating jobs for the young people of Africa.

In just twelve months, Akon Lighting Africa has brought solar powered electricity to 480 villages across 15 different African nations, including 100,000 solar street lamps and 1,200 solar micro grids. Through public-private partnership, Akon’s company has installed solar powered lights into schools, community centers, health institutions, streets and private homes in rural communities. Not only has this project provided villages with electricity for the first time, but the physical construction and maintenance of these solar power grids has indirectly created jobs for a reported 5,500 young people. Unemployment, especially among the under-35 population, is endemic across sub-Saharan Africa. Lack of infrastructure, such as electricity, is just one symptom of poverty; joblessness is another. Akon’s approach is tackling both.

Akon’s vision is that Solektra and Akon for Africa will be the dominant provider of renewable energy in Africa within the next decade. In 2016, Akon Lighting Africa plans to expand to 10 additional countries including the Democratic Republic of the Congo, Angola and Chad. Both Akon Lighting Africa and Solektra International are emerging as key players in the future of solar power for unlit African communities–Solektra International has been invited to attend the Powering Africa Summit for 2016, showing their increasing importance in the development conversation.