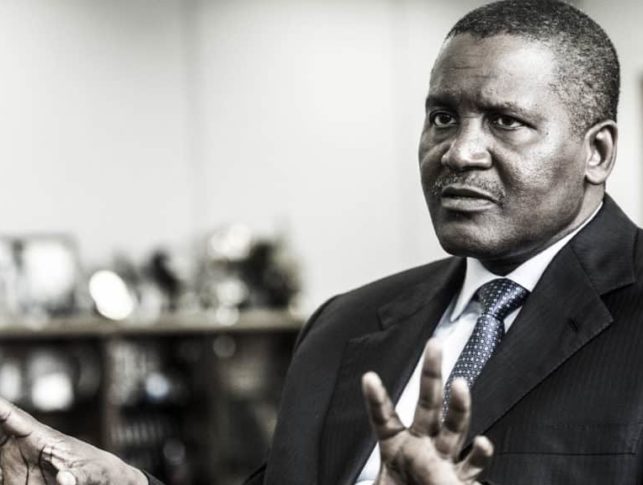 At just 20 years old, Dangote received a loan of 2,300 euros and three, 10-ton cement trucks from a powerful and influential uncle. Born into a merchant family in northern Nigeria, Dangote knew from a young age that the only way to assure a comfortable future was to work for it: in 1977, cement was an extremely expensive and highly sought after commodity, and Dangote had grabbed a solid piece of Nigeria’s market.

This early-entry into what soon became an wildly lucrative industry proved wise. Dangote capitalised on the scarcity of cement, allowing customers to pay several months in advance for their delivery. A single cement truck could earn about 6EURO per day—this might not seem like a lot, but for a young Nigerian man in 1977, it was more than enough to quickly repay his uncle’s loans.

After just 4 years in the small-scale cement business, Dangote decided to diversify. He set his sights on Lagos, the capital of Nigeria, and created the cement giant Dangote Group.

It was in 1983, only two years after the creation of the Dangote Group, that a military coup rocked the country. Businessmen all over Lagos were accused of corruption and imprisoned—Dangote was not one of these unlucky individuals. He swept into the pock-marked economy and quickly invested into the areas recently vacated by his less fortunate business peers.

Dangote Group tested its strength in the sugar and rice markets before Dangote himself decided to take a business trip to Brazil. It was on this business trip that his decision to switch from trading to manufacturing.

In 1999, Nigeria held its first democratic election in 6 years. Former military ruler and chicken farmer Olusegun Obasanjo was elected on his platform of domestic industry protection and promotion—Obasanjo and Dangote had been friends since 1981. For Dangote, the election could not have gone any better.

Dangote Sugar formally began in 2000 and was off to a running start, producing 1.44 million tons—enough to satisfy 90% of domestic demand. In 2007, Dangote Sugar debuted on the Nigerian Stock Exchange after sales had quadrupled to a whopping $450 million. Dangote’s flour company, which began in 1999 and produces pasta and noodles, was similarly successful. What began with just one mill soon tripled in revenue to $270 million before joining Dangote Sugar on the NSE in 2008—a banner year for Dangote as he became the first Nigerian on the Forbes’ World’s Billionares list.

Dangote Cement, Sugar and Flour do a combined business of $3 billion

What Dangote wanted next was a cement factory. Nigerian banks, however, did not have the ability to provide him with the $479million loan he needed—being a savy businessman, Dangote turned to the World Bank’s International Finance Corporation and, after agreeing to put down $319 million of his own, received the funds to build his own cement factory.

Today, Dangote Cement, Sugar and Flour do a combined business of $3 billion in revenue each year, although Dangote Flour currently operates at a loss.

Obasanjo won reelection in 2003 and his commitment to supporting domestic business was as strong as ever—as long as, however, that domestic business belonged to Dangote. Any challenger who attempted to enter Nigeria’s market was met with a serious handicap. When Dangote Sugar went public, for instance, raw sugar was taxed twelve times less than refined sugar, a break from which Dangote benefited.

Aliko Dangote the Man Behind the Money and Mills

Dangote donates his money to philanthropic causes in Nigeria and beyond, and appeared with then-President Gooluck Jonathan at the World Economic Forum in 2014. He encourages not international aid to Africa, but international investment in local industry.

Dangote works hard to maintain his aura of self-made workaholic, but his actions often speak louder than words. He enjoys the finer things in life, such as his yacht, named Mariya after his mother. Dangote has intimated that he has plans to buy Arsenal Football Club with the ulterior motive of promoting Nigeria in the international football world. He claims that in doing so, his name and thus nationality would follow all of Arsenal’s successes, and bring Nigeria onto the global stage as something more than the birthplace of Boko Haram.

Aliko Dangote has done wonders for Nigeria’s economy: he employs 22,000 people in a country overrun by underemployment, and has proved that an African country can have successful, reliable industry. Some worry that his close ties to current and previous governments are giving him an unfair monopoly of Nigeria’s industry, and that his large monetary contributions to the ruling party will inhibit industrial transparency. His journey to the top may not have been entirely pure, but, then again, who’s is?