Nigeria’s Dangote shifts focus from cement to oil and gas 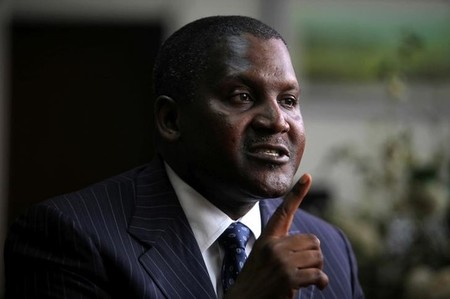 LAGOS (Reuters) – Africa’s richest man, Aliko Dangote, plans to launch Nigeria’s first private crude oil refinery by 2019 while almost doubling his cement production on the continent by adding plants in eight countries as he shrugs off a regional economic downturn.

Dangote told Reuters the $12 billion refinery would have a capacity of 650,000 barrels a day, cornering the market in Africa’s most populous country, where fuel shortages are a perennial problem.

Until recently, Nigeria was Africa’s biggest crude oil producer but it imports 80 percent of its fuel because poor maintenance means its four refineries never reach full output. Its current daily consumption is 260,000 barrels, according to the International Energy Agency.

A slump in commodity prices has hammered Nigeria’s economy – along with many others on the continent – and raised the cost of borrowing but Dangote, whose business empire stretches from cement to flour and pasta, is pushing hard into oil and gas.

“It will be ready in the first quarter of 2019,” the billionaire founder of Dangote Cement said of the refinery. “Mechanical completion will be end of 2018 but we will start producing in 2019.”

Dangote said the plant, which will include a $2 billion fertilizer unit, was being funded through “loans, export credit agencies and our own equity”.

Some $3.25 billion had come from local and foreign banks, while the central bank had also chipped in. The IFC, the private sector arm of the World Bank, has lent $150 million.

Dangote also has plans for a gas pipeline through West Africa. Nigeria has the world’s ninth largest proven gas reserves, at 187 trillion cubic feet (tcf), but loses half of it to flaring and re-injection.

Despite the new focus on oil and gas, the business magnate said he planned to build cement plants in Cameroon, Ethiopia, Kenya, Mali, Niger, Nigeria, Senegal and Zambia by 2018. Another plant will open in Congo Republic by September, he added.

A cement plant in Ivory Coast would triple output to 3 million tonnes, up from an initial target of 1 million, he said, while two new plants in Nigeria would add 6 million tonnes annually.

The collapse in oil prices has hit Nigerian companies hard, with many unable to access dollars due to central bank foreign exchange restrictions imposed to prop up the naira.

The worst-affected have gone to the wall or shed large numbers of staff, but a study by Reuters of an 11-week period in March to May showed that Dangote firms managed to secure a healthy share of dollars at the cheap official rate. [nL4N19E3JX]

Dangote said the $161 million bought during that period from the central bank merely reflected the size of his business and did not represent preferential treatment.

“We have been badly affected like any other company,” he said, arguing that operational costs totalled $100 million each month due to recurring expenses such as the purchase of parts for cement production and running a fleet of 9,000 trucks.

“When you are talking about 20 billion dollars worth of projects, what is 161 million? One-hundred-and-sixty-one million dollars is my six weeks’ need,” he said.

Dangote’s sugar refinery in Nigeria had reduced capacity by 15 percent as a result of the dollar crisis. “We ended up owing a lot of dollars,” he said.

This week, the central bank removed the peg that has held the naira at the official rate of 197 for the last 16 months, leading to a 30 percent devaluation as the currency traded freely on the interbank market.

Dangote said the decline had pushed up costs. [nL8N19F31Y]

“The gas, which is our main source of power, is priced in dollars. If there is 40 percent devaluation, your price will go up by 40 percent. Every single aspect of the production will go up by that percentage,” he said.

Dangote also said he was eyeing a listing on the London stock exchange “within the next year or two”.

(By Alexis Akwagyiram. Editing by Ulf Laessing and Ed Cropley)