Liberia will turn schools over to private operator 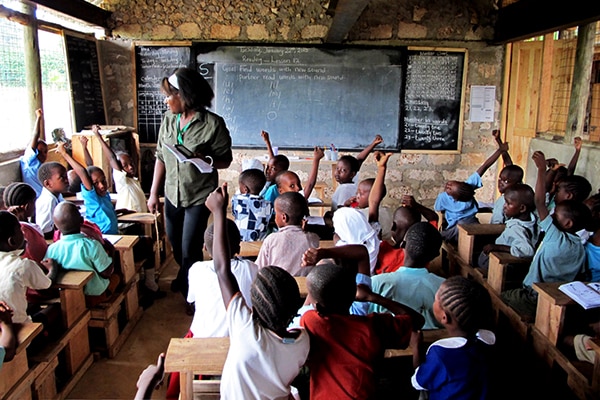 Bridge International Academies, which runs schools in Kenya and Uganda, will pilot a program in Liberia’s troubled school system.

The government of Liberia plans to turn its troubled school system over to a private company, drawing objections from representatives of the United Nations and threats of a strike from the country’s teachers.

Education Minister George Werner said the country would launch a pilot project in September, when 50 of the nation’s 5,000 schools will be taken over by Bridge International Academies, a private company based in Kenya, which also operates schools in Kenya and Uganda.

Werner noted that the Liberian school system has been “in a state of decay for the last three decades.” He said he decided to turn to Bridge after realizing that incremental change by the government would not happen quickly enough for the system to benefit Liberia’s children.

Werner said education would still be free to Liberian students.

High rate of failure on exams

Disrupted by years of war and then the recent Ebola crisis, the school system was labeled “a mess” by Liberia’s president, Ellen Johnson Sirleaf in 2013 after 25,000 of country’s high school graduates failed their university entrance examination.

After Werner announced the pilot program, Liberian school teachers approved a resolution threatening to strike if the government goes ahead with the plan.

One Monrovia teacher said schools are underperforming in part because of the low teacher salaries the government pays, forcing teacher to take two jobs. Joseph Komoreah said Liberians should be in charge of their education, not an outside company.

Meanwhile, a United Nations official said the plan amounts to a “gross violation” of the Liberian government’s obligation to provide a right to education.

Kinshore Singh, the U.N. special rapporteur on education, call the plan an “attack” on teachers and public schools.

Calling the scale of the plan “unprecedented,” Singh said a public education system is “a core function of the state and abandoning this to the commercial benefit of a private company constitutes a gross violation of the right to education.”

Singh argues Liberia would do better to invest in improving its own education system and could approach the United Nations for assistance.

About 1.5 million are enrolled in Liberia’s primary schools but only about 20 percent of them complete 12th grade. Classrooms are often overcrowded and under supplied, even lacking enough chairs for all the students.

Bridge operates more than 350 schools in Kenya and seven in Uganda, charging each student $6 per month. The World Bank invested $10 million in Bridge International in 2014 and social investors including Bill Gates and Mark Zuckerberg have also provided funding.

But the company has also been criticized for its teaching methods.

The company calls its approach the “Academy in a box.” Bridge develops teaching materials and delivers lessons to teachers on a tablet they can use in the classroom. Bridge also uses computers to monitor how the students are progressing so educators can intervene if there are issues.

After it received World Bank funding, more than 100 organizations supported a statement critical of Bridge and the privatization of education in Kenya and Uganda.

She said Bridge pupils had a 22 percent higher pass rate on national exams in 2015 than other students.

In the pilot program, the Liberian government will continue to pay the teachers but Bridge International will vet and supervise them. The company said it is looking for outside funding for the pilot.

If the 2016-17 pilot goes well, Liberia may look for other private education providers to help run its schools.

Bridge International Academies said it is the world’s largest education innovation company with more than 100,000 students in more than 400 nursery and primary schools in Africa. The first Bridge school opened in Nairobi, Kenya in 2009. In addition to its African programs, Bridge is planning to expand into Asia.

Founded in 2007, the company hopes to operate more than 3,000 schools in Kenya, with more than two million students, by 2018. The company wants to reach 10 million students in a dozen countries by 2025 with its own schools or using its model in partner schools.

2 Responses to Liberia will turn schools over to private operator