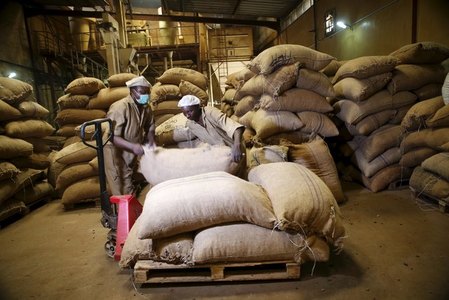 LAGOS (Reuters) – Nigeria expects its non-oil revenues to nearly double this year as Africa’s top oil producer seeks to offset a slump in oil revenues, according to a presentation seen by Reuters on Monday.

President Muhammadu Buhari plans a record 6.06 trillion naira ($30.6 billion) budget to stimulate Africa’s biggest economy, which has been hammered by a fall in oil exports that had made up 70 percent of state income.

Funding of the budget with an expected deficit of 2.2 trillion naira has been so far unclear.

Detailing its plans, the government expects to generate 3.38 trillion naira ($17 billion) this year from non-oil sources, up 87 percent from 1.81 trillion naira in 2015, the presentation showed.

Corporate income tax collection is expected to exceed the 700 billion naira generated last year, while the government also aims to recover stolen Nigerian assets stashed abroad as part of efforts to crack down corruption, it said.

The biggest source of revenues this year will come from what the presentation called “independent revenue”, without providing further details.

President Muhammadu Buhari plans to squeeze informal small traders who make up almost half of GDP, this year to boost tax revenues by 33 percent.

The government also wants to switch its debt mix so that 40 percent of loans would be from abroad, compared to 16 percent now, the presentation showed. Loan repayments will be stretched.

Buhari has asked the United States for help in returning stolen Nigerian assets stashed in U.S. banks. In March, the U.S. said it had frozen more than $458 million of funds that the late military ruler Sani Abacha had stolen.

Nigeria has recovered about $1.3 billion of Abacha’s money from various European jurisdictions as of last year, with more than a third of that coming from Switzerland. Abacha also held assets in France, Britain and British offshore centers such as Jersey.

Nigeria has also held talks with China, the World Bank and other international institutions to get loans to fund his plans to roll out infrastructure projects.