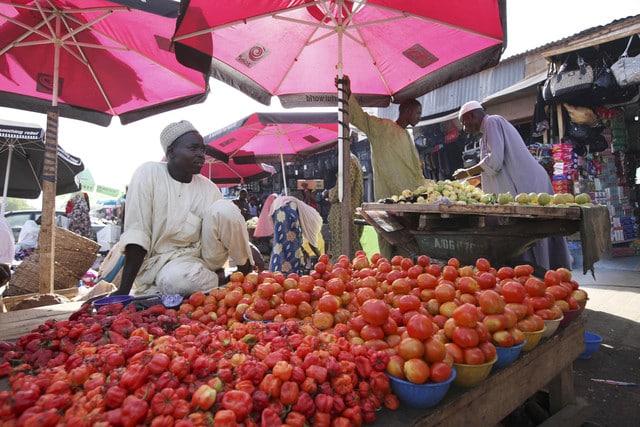 Nigeria grows around 1.5 million metric tons of tomatoes each year, making it Africa’s second largest producer and the world’s 13th. And yet Nigeria is not on the list of official exporting countries of tomatoes or tomato products. In fact, to meet local demand of more than 2 million metric tons of tomatoes, the country imports large quantities of both fresh and processed tomatoes, mostly from China. It is the world’s largest importer of tomato paste, seeing over 300,000 metric tons ($360 million) of tomato paste imported annually.

It’s a situation comparable to Nigeria’s oil industry. While it is the largest oil producer in Africa, gasoline shortages are a regular occurrence as a lack of infrastructure, poor maintenance, and mismanagement have left refineries working below capacity and forced a reliance on imports. Oil makes up just 14% of GDP, while 38% of the country’s imports are petroleum products.

In explanation of the tomato statistics, the Central Bank of Nigeria reports that the approximately 200,000 Nigerian farmers growing tomatoes lose about half of their harvest each year, due to poor food supply chain management and inadequate infrastructure of water, storage, and power supply facilities. The remaining half of the harvest is then subject to price depression, caused by the perishable nature of crops, pests and disease, high rains at peak season, poor marketing, multiple levies by state and local government agents, corrupt practices by officials at air and sea ports, and the costs of processing, packaging, and storage machinery and equipment. Farmers are unable to consistently make a profit, and as a result, many have stopped cultivation. But Africa’s richest man, Aliko Dangote, is looking to change the future of Nigerian tomatoes. Aiming to create jobs and boost Nigeria’s tomato production and domestic output, he has spent the last five years building a $20 million tomato processing plant outside the country’s second largest city, Kano (a city which has been blighted by poverty and unemployment, and the Islamist group, Boko Haram).

Set to open next month, the Dangote Tomato Processing factory will be Africa’s largest: the size of 10 football pitches set within 17,000 hectares of irrigated fields. It is expected to produce 430,000 tons of tomato paste per year. And it will directly employ 120 people, buying tomatoes from 50,000 farmers. The factory will employ modern farming techniques and improved seed varieties and chemicals (funded by the Central Bank of Nigeria) which are expected to increase yields and encourage farmers back into growing tomatoes.

The factory’s general manager, Abdulkarim Kaita, said: “Nigeria is such a huge market for tomato paste that we will find quite challenging to satisfy. Already local tomato paste packaging companies have placed orders with us which we will have to work hard to satisfy. We are set to begin operations. We are only waiting for the tomatoes which are ripening in the fields.”

Aliko Dangote is the founder of the Dangote Group, one of Africa’s leading conglomerates. He comes from Kano, now home to his tomato factory, where, in 1977, he started the Dangote Group as a small food-trading company. Helped with a $3,000 loan from an uncle, he went on to transform this small business into an import and trading company with interests in flour, sugar, and salt. And almost four decades later, the Group is active in 15 African countries, and has expanded to cement, steel, real estate, telecommunications, haulage, port operations, polypropylene packaging, and oil and gas.

Dangote Cement is Africa’s largest cement producer, and counts plants in Cameroon, Ethiopia, Zambia, and Tanzania, producing more than 30 million metric tons annually. And, dominating the sugar market in Nigeria, the Dangote Group sugar refinery in Lagos is the second-largest in the world.

Despite a weak Nigerian currency and domestic difficulties which saw his net worth plunge $5 billion over the past year, Dangote is still Africa’s richest man. With an estimated net worth of $14.3 billion dollars (Jan 2016), Forbes ranks him as the 67th richest person in the world.

But while undoubtedly Dangote has seen huge success in Nigeria, there are also concerns that his actions are not entirely positive for the country. 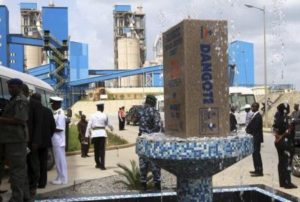 For example, thanks to Nigeria’s characteristic power cuts, the Kano factory is to rely on diesel generators for electricity, something which will significantly add to production costs and therefore reduce the factory’s ability to compete with imported products. This status quo has so far led to the closing of numerous factories in the state of Kano, including two of Dangote’s own factories. As a solution, the Nigerian government plans to put restrictions on tomato imports in place this year, giving Dangote a forced competitive edge. The vice-president of Nigeria’s manufacturers union, Ali Madugu, comments: “Once the government can place restrictions on the import of Chinese tomato pastes… the sky’s the limit for the Dangote tomato paste because the market is there for them to exploit”.

Some fear that this policy of government assistance – whether higher tariffs, restrictions on imported products or outright bans – is creating damaging monopolies in Nigeria, which push up the local prices that everyday Nigerians must pay. For example, Dangote Cement makes a profit margin of 60% per bag of cement in Nigeria, but a margin of between 6% and 13% across the rest of Africa. Nigerians pay, as a general rule, twice or three times more than any other African country for cement. Restrictions on imported paste (which could be sold at prices that undercut the Dangote Group) could have the same effect, placing Dangote Tomato Processing in a position of monopoly, able to control pricing, production, and jobs.

Again aligning his own interests with those of the nation, as his businesses often seem to have done, Dangote has also announced a move into Nigeria’s precarious oil industry. The 650,000 barrel-per-day Dangote Petroleum Refinery and Petrochemical Company, located in the Lekki Free Trade Zone in Lagos, is scheduled for completion by early 2018. Promising to reform the Nigerian oil industry, increase productivity, and create more jobs, the facility will produce gasoline, diesel, aviation fuel / household kerosene, polypropylene, and fertilizer, and will be the fifth-biggest in the world.

Senior General Manager, Madhav Kelkar, said Dangote’s plant would not just supply the domestic market, but could lead to a self-sufficient Nigeria that could export to other parts of the world. And perhaps this is so. But for now, only the longer-term local price of tomato paste will reveal whether this tomato processing factory has been a positive development for the people of Nigeria.