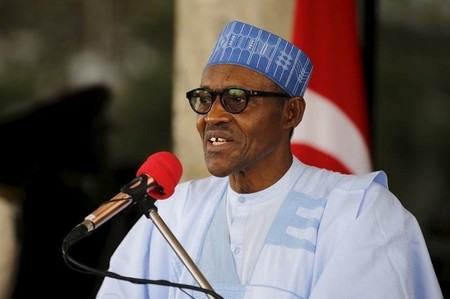 The 6.06 trillion naira ($30.6 billion) budget is an attempt by Africa’s top oil exporter to stimulate an economy hammered by the fall in crude oil prices. Oil sales make up about 70 percent of national income.

Growth last year fell to its slowest rate since 1999 at 2.8 percent and inflation rose to a near four-year high of 12.8 percent in March while capital imports declined by 74 percent year-on-year in the first quarter of 2016. [nL5N1817H4]

In a speech given after the signing, Buhari said the current period was “probably the toughest economic times in the history of our nation”.

“In designing the 2016 budget, we made a deliberate choice to pursue an expansionary fiscal policy despite the huge decline in government revenues from crude oil exports,” he said.

The president said 350 billion naira would be spent on capital projects, and he compared the 200 billion allocated to road construction with the 18 billion earmarked for that purpose in the 2015 budget.

Buhari withdrew his original budget bill in January because of an unrealistic oil price assumption. Parliament approved an amended proposal in March but only submitted highlights, prompting Buhari to say he would only sign the bill after it was resubmitted.

The lack of a budget, almost a year after Buhari took office, meant ministries were unable to allocate funds to projects in various sectors.

“The passage of the budget has been a long journey, and it has been as much about process as content,” Nigeria-focused PM Consulting’s Antony Goldman, said.

The government plans to generate 3.38 trillion naira this year from non-oil sources, up 87 percent from 1.81 trillion in 2015 [nL5N17E2KU]. But, with the heavy reliance on oil sales, it is unclear how this will be achieved.

Finance Minister Kemi Adeosun has said Nigeria is expected to post budget deficits for the next two to three years [nL5N17E17G]. In 2016, the deficit is seen at 2.2 trillion naira compared with a previously estimated 3 trillion.

She has said Nigeria plans to borrow a total of 1.8 trillion naira from abroad and at home.