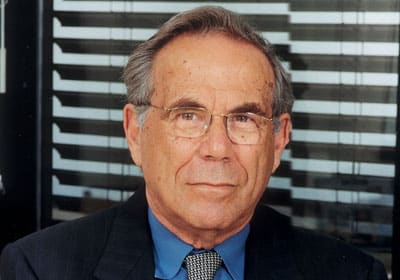 Born in Germany in 1926 a decade before his family was forced to flee the Nazis to what was then British-Mandate Palestine, Stef Wertheimer is an Israeli industrialist who believes that his country’s problems and solutions lie in economics. Over the last 30 years, the billionaire has invested millions of his own personal wealth in building industrial parks and training programs for Arabs across Israel, in the hope of using job creation and lowered economic disparity to foster peaceful coexistence between Arabs and Jews.

Now aged 89, Wertheimer’s early academic career was short lived. He was expelled from school aged 14, and instead started working in a camera-repair shop. Later, in the lead-up to Israel’s War of Independence in 1948, he made weapons for the Jewish underground. And after the war, in which he served as a pilot and a member of the Palmach strike force, he set up a small metal tool-cutting factory in a garage in his garden in Nahariya. The city, Israel’s northernmost, is in an underdeveloped, largely agricultural and Arab region, about which Wertheimer says: “There were no jobs, this area was agricultural, and I decided that I had to do something on my own”.

He named his small operation Iscar, and within five years, the company was exporting precision carbide cutting tools to Europe and the US. Today, it is one of the world’s top two companies in the field, and its automotive, aerospace, and electronics industry customers include General Motors and Ford. It is also now the largest of 15 companies that make up Wertheimer’s International Metalworking Companies (IMC), a Group valued at $10 billion, with 140 subsidiaries in 61 countries around the world, employing over 10,000 people.

Wertheimer further expanded his manufacturing holdings in 1968, when the Israeli government asked him to make blades for the Israeli Air Force following a French weapons embargo. In the years following, Iscar Blades (now Blades Technology Ltd.) has similarly become one of the world’s largest in its field. With a valuation of $1 billion, its customers include Rolls-Royce and General Electric.

Wertheimer solidified his position as one of Israel’s most respected businessmen in 2006, when Warren Buffett’s conglomerate holding company, Berkshire Hathaway, bought an 80% stake in IMC for $4 billion. It was Buffet’s first purchase outside of the US, and he went on to buy the remaining 20% of the company in 2013 for $2.05 billion. The Wertheimer family (Wertheimer’s son Eitan started running day-to-day operations at Iscar in 2004) also sold its 51% stake in Blades Technology in 2014. And the deals have made Wertheimer the head of the wealthiest family in Israel and the country’s third wealthiest man, with an estimated net worth of $5.6 billion. In the late 1970s, Wertheimer also served a term in the Knesset, Israel’s parliament. It was during this time that he decided that there may be a different route to achieving peace and stability in Israel: one centered on industry and job creation. Acting on his idea, in 1982 he established a residential community near Nahariya, Kfar Vradim, and later the same year moved the Iscar plant to the nearby industrial zone, Tefen. In 1984, the Tefen Industrial Park was officially inaugurated, marking Wertheimer’s first park dedicated to helping Arab and Jewish Israeli entrepreneurs set up export-focused industrial initiatives. “I started looking for a way to influence the Arab population in Israel, Jordan and the Palestinian areas by developing industry,” says Wertheimer. “The idea of industrial parks in the Middle East and on the borders between Israel and its neighbors is that the parks will bring industry and provide jobs, which will keep people busy working, instead of engaging in terrorism”.

The Tefen Industrial Park now hosts 20 companies, and also offers a post service, a shared dining hall, landscaped gardens, a collection of vintage cars, a tennis court, and a school that educates students in industry and innovation. Wertheimer, whose own main office is on the site, has also created art and German-Jewish history museums.

His unique philosophy stems from the country’s problem of economic disparity. Israel’s 1.7 million Arab citizens make on average 58% of the income of their Jewish counterparts. Arab men make 69% of the income of Jewish men. And there are three times less Arab women in the labor force than Jewish women. The Arab population is also largely excluded from Israel’s current tech boom, which this year has seen $9 billion in tech mergers and acquisitions.

Based on the five principles of export, education, coexistence, community, and culture, Wertheimer has now established six further parks in typically Arab dominated regions – five in Israel (in Tel Hai, Omer, Dalton, Lavon, and Nazareth) and one in Turkey. The industrial parks, which Wertheimer calls “capitalistic kibbutz”, also run training programs before placing the workers in jobs, and recruit Arab and Jewish entrepreneurs for industrial entrepreneurship courses to create Arab-Jewish partnerships. Firms also receive benefits encouraging the employment of professionally educated Arabs. The parks have so far generated and supported 260 companies, which have seen an average yield of $200,000 in sales per employee, higher than Israel’s average. And Wertheimer also has plans to add another park aimed at the Bedouin, one of the region’s poorest communities.

Yitzhak Rabin, former Israeli prime minister and 1994 winner of the Nobel Peace Prize, said: “With 20 more industrial parks like these, it would be possible to double the industrial export output of Israel. This would completely change the economic, social and security situation.” Wertheimer has also been honored for his work. He was awarded Israel’s highest honor, the Israel Prize, in 1991. In 2010, he received the Oslo Business for Peace Award. And Germany has bestowed both the Federal Cross of Merit and the Buber-Rosenzweig medal for his work in advancing peace through entrepreneurship.

Not everyone agrees that an economic solution will solve Israel’s problems, but Wertheimer is fully committed to a future trying to do just that.