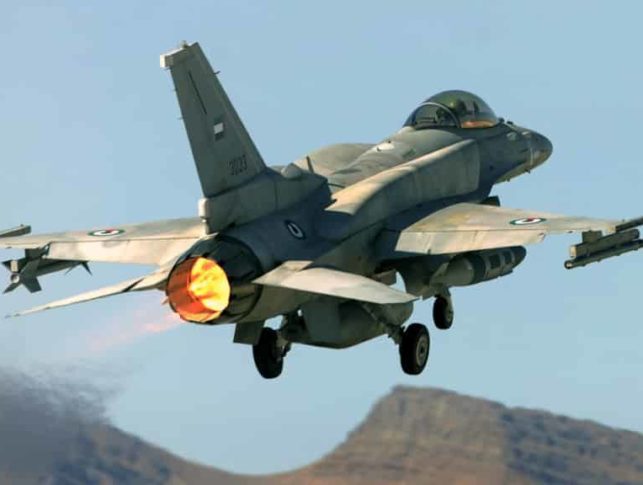 In light of the downing of a Moroccan F-16 jet in Yemen, the question “Why is Morocco intervening in the Yemen crisis?” must be asked. The Foreign Ministry has abandoned its legendary discretion and The Royal Air Force – along with a Saudi Arabia led coalition- is engaging in Yemen against Houthi Shiite rebels. Why does Morocco have an interest in this? Here are some explanations.

The Foreign Ministry issued this explanation: “In response to the request of His Excellency, Mr. Abdrabbou Mansour Hadi, legitimate President of the Republic of Yemen, we support the legitimacy of Yemen and solidarity with his supporters. We are committed to the defense and security of the Kingdom of Saudi Arabia, Al Haram Sharif and the other countries of the Gulf Cooperation Council which the Kingdom of Morocco is bound by a multidimensional strategic partnership. The Kingdom of Morocco has decided to provide all forms of support, and support to the coalition, to support the legitimacy of Yemen in its political, intelligence, logistics and military endeavors. This support includes the implementation of the Royal Air Forces stationed in the United Arab Emirates available to the coalition to leave help Yemen in the crisis in which it is sinking and the bloody situation he crosses, and to deal with any foreign conspiracy against the country and against the security of the Gulf and Arab nations. ”

Several reasons for, and levels of, this commitment

There are several reasons for, and levels of, this commitment: the Arab Spring. In 2011 the 6 countries of the Gulf Cooperation Council (Saudi Arabia, Kuwait, Bahrain, Qatar and Oman) suggested membership to the Council for Jordan and Morocco, two countries known to have effective armies and intelligence services, in addition to being monarchies. The Kings, and Abdullah II and Mohammed VI politely declined, proposing strategic agreements instead of full membership in the Council.

Under these agreements the Kingdom of Saudi Arabia and the Gulf emirates were to give financial support to Morocco and Jordan in return for military and logistical support in case of need. The need is there now. Rabat has already sent its air force to support the UAE in their war against Daesh. There are 6 Moroccan fighters, who participated in air strikes on Yemen, deployed in this emirate.

Saudi Arabia and Morocco: a strong links between two Monarchs

Bilateral agreements and relations between Rabat and Riyadh do not allow the latter to engage in a war without Rabat’s support, despite the power of the Saudi army in equipment. Moroccan King Mohammed VI and Saudi Arabia’s new King Salman maintain very friendly relations. When the Saudi king was crown prince, he often spent holidays in Morocco where he resided in the royal palaces. The links between the two Monarchs are strong. Recently, the two sovereigns had a telephone conversation in which Salman thanked Mohammed VI for his actions.
Morocco acts within international law, which can manifest in two ways: by international mandate or by an official request made by the official government of a sovereign nation. Yemen President Abdrabbou Mansour Hadi has made an official request for support, as mentioned in the press release of the Foreign Ministry. Morocco’s actions are legal within international law.
Relations between Rabat and Tehran have been warming but Shiite Iran cannot invest in the Arabian Peninsula without worrying Morocco. The Sunni countries Maliki rite is led by a Commander of the Faithful. Believers devote a centuries-old animosity for Shiites. The Houthis are Shiites and it is believed they have the support of Tehran, Ryadh’s arch rival in the Middle East- which makes them a threat to Arab interests across the whole region. Morocco, though, can withdraw without reacting to a movement that is likely to disturb the already fragile balance in the peninsula.

A fight for the control of the Gulf of Aden

If the Houthi offensive is successful, it would give the rebels, and Iran, control of the Gulf of Aden, a gateway to the Suez Canal. They would control the passing tankers that supply Europe with oil, other commercial boats, and military vessels. Along with this strategic Strait, there is risk of an Iranian presence in the Strait of Hormuz in the Persian Gulf. It is thought that Arab intervention was made by proxy of Western powers, whose silence confirms their approval and blessing to this operation.
The Houthi rebels are backed by former President Ali Abdullah Saleh, who was removed from office following the Arab Spring. The political outcome in Yemen was the work of the former Special Adviser to the UN Secretary-General on Yemen, Jamal Benomar. Benomar is a Moroccan who, according to diplomatic sources, has never lost touch with his country of origin. Morocco could have been encouraged to take action by Benomar.

Morocco is positioned as an indispensable regional military power with its new generation of information services (DST BCIJ) and its mobile and efficient army, which is equipped with the most modern equipment and served by highly trained officers. This could still be used in future dealings with the kingdom and emirates of the Arabian Peninsula.
Support for the intervention in Yemen has been mixed in Morocco but mostly positive. Social media posts are blaming King Mohammed VI for getting Morocco involved in this distant war and are opposed to the collateral damage suffered by many Yemeni citizens. Some believe this is a US-led “War by Proxy” that Morocco should stay out of. One thing is known: the world will be watching as this elaborate chess match plays out.

Politics Why Morocco intervened in Yemen?