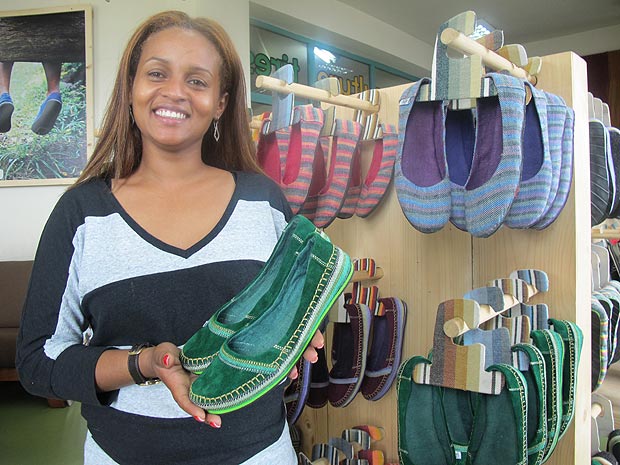 A young Ethiopian entrepreneur has turned her concern for unemployed artisans from her home community into a global shoe brand with millions of dollars in revenue.

Bethlehem Tilahun Alemu’s SoleRebels produces eco-friendly shoes that are sold internationally by large retailers including Whole Foods and Amazon as well as in a growing number of the company’s own standalone stores.

SoleRebels also complies with fair trade standards set by the World Fair Trade Association, according to Alemu. The company pays employees three or four times the minimum wage in Ethiopia and provides medical insurance and transportation to and from work.

Alemu, 35, started the company in 2005, shortly after she finished college. She had seen that skilled artisans lived in squalor and chronic unemployment in her small, impoverished community of Zenebework in Addis Ababa.

“I wanted to find a way to share my love for the amazing artisanship of Ethiopia with the world while creating well-paid meaningful work for the people in my local community, while leveraging their immense creative skills,” she said.

At the start, the company was Alemu, her husband, her teenage brother and two artisans. It has grown to employ 300 people in Ethiopia and several hundred more in its international stores.

The design of the shoes draws on Ethiopia’s famous Selate and Barabasso shoes that soles that were worn by Ethiopian rebel fighters who opposed Italian forces attempting to colonize the country nearly a century ago. Those shoes used recycled tire material for the soles.

The name SoleRebels derives in part from that historic connection.

However, the name also reflects Alemu’s goal of countering a dominant narrative – a legacy of the famine years – that Ethiopians are destined to rely on international aid.

Alemu said the success of Sole Rebels is “living proof” that her country, one of Africa’s poorest, is ready to move from being dependent on foreign aid to taking charge of its economic future with home grown skills and resources.

Eugene Owusu, who represents Ethiopia with the United Nation’s Development Program said SoleRebels is “blazing a trail’’ for other companies as his country seeks to reduce its need for foreign aid.

The economy of Ethiopia has grown at a rate of about 10 percent a year in the past decade with growth domestic product reaching an estimated $50 billion in 2014.

As one of the fastest growing non-oil economies in Africa, Ethiopia has become a destination for foreign investment. Ethiopia seeks to grow exports as a share of its economic output largely with the sale of minerals and manufactured goods.

With her own exporting success, Alemu has been widely recognized for her achievements.

The World Economic Forum named her a Young Global Leader in 2011. She was featured on Forbes list of “100 Most Powerful Women” and listed by Business Insider as one of “Africa’s Top 5 Female Entrepreneurs” in 2012. The following year, Fast Company named her one of its “100 Most Creative People in Business 2013,” while The Guardian called her one of “Africa’s Top Women Achievers.”

SoleRebels shoes are sold in more than 30 countries through online sales and major retailers plus a growing number of the company’s own shops. In addition to its flagship store in Addis Ababa, SoleRebels has more than a dozen standalone retail outlets in the United States, Taiwan, Japan, Greece, Switzerland, Spain, Austria, and Singapore.

One of the world’s fastest growing footwear brands, the company projects it will have 50 stores by 2018 and forecasts revenue of $10 million or more this year.

Alemu said her business model shows that eco-friendly production and community empowerment go hand in hand with financial success. But as much as her product helps her community, Alemu said quality is the key to her company’s success.

“We don’t want to make a pity product; we want people to buy our shoes because they look good.”