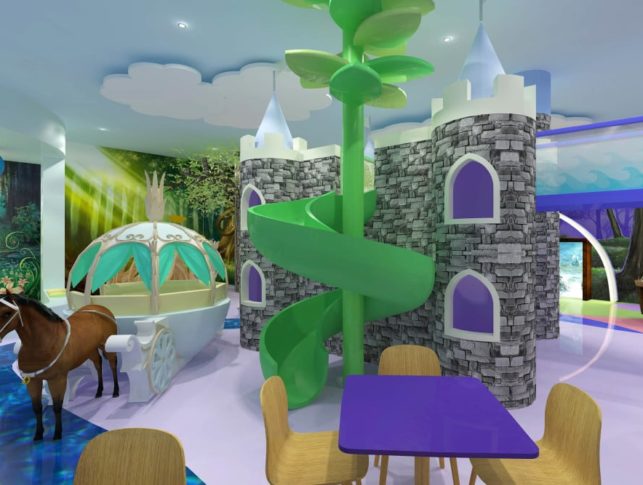 Basma Al Fahim and Fatma Al Madani wanted to spend more time with their young children. But to them, that didn’t mean staying at home all day like many of their fellow Emirati women.

Instead they launched Fairytales, an indoor play area for young children in Dubai. For the two friends, business innovation began with family.

Al Madani had left a seven-year career in government to focus on raising her two young daughters while Al Fahim, who has two young sons, had already launched several successful businesses when they opened Fairytales in December.

The play center is a new idea in the United Arab Emirates, where most women stay home to take care of their children and only 14 percent of the workforce is women, mostly younger women who have been able to attain an education as the federation of emirates modernizes.

Unable to obtain bank financing for their project, the two women funded the business themselves from their savings.

“The concept was inspired by our children,” Al Madani said, noting that their children were playing pirates and fairies while the two women held their first brainstorming session in the same room.

“They reminded us of how we played as kids’’ before digital devices came along, she said. That sparked the goal of creating an environment that stimulates the child’s imagination and intellectual growth.

Their priorities as mothers – education, healthy food, and safety – became priorities for their business, according to Al Fahim, who had already started a fashion brand, an events company, and a beauty salon.

At Fairytales, their goal to spark the imagination and creative thinking of each child as well as to instill social responsibility among the children, who are up to age eight.

They donated more than 200 children’s books during a local donation campaign on behalf of young cancer patients in Dubai Hospital on World Cancer Day.

The two also took part in a Happy Hearts project, organized by The Happy Box in Dubai, which sent more than 600 handmade cards to orphans in India.

Al Fahim brought significant business experience to the venture as founder and managing director of Eventra Events, an event-planning agency.

After studying marketing at Zayed University, she moved to Dubai and worked in digital and brand marketing. Coming from a prominent business family, she wanted to set a pioneering example for young Emirati women.

Her family’s conglomerate is the Al Fahim Group, whose activities include support for development of oil and gas fields, luxury cars, hotel management and investments. She chairs the company’s employment committee.

She opened the events business in 2010, bringing a fresh approach to events ranging from corporate gatherings to weddings to exhibitions. Today, Eventra is a premier event management company in Dubai.

Al Fahim went on to open The Dollhouse, a beauty salon with what she described as a “super chic” atmosphere and attention to detail and glamour.

After establishing The Dollhouse, she also launched Sirkaya, a fashion line that has become a well-known brand in Dubai.

After starting Eventra with three employees, she said she now has more than 100 working on her different ventures.

She said she has many more business ideas. Growth plans keep her motivated.

“When I say growing I mean improving,” she said.

Al Fahim encouraged young Emirati entrepreneurs to pursue their dreams by having confidence in themselves and focusing on key goals.

“Keep your mind positive,” she said. “Train your brain to think positively to attract the right energy in your life.”