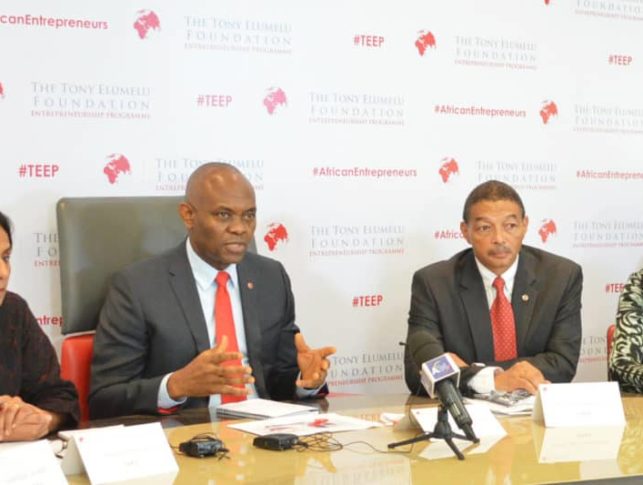 The Nigeria-based foundation pledges $100 million to train and mentor 1,000 entrepreneurs a year for 10 years with a goal of creating one million jobs.

The program, launched in 2015 by the Nigerian entrepreneur and philanthropist Tony Elumelu, is designed to identify 10,000 entrepreneurs over a 10-year period and empower them to launch ventures that will create one million jobs and add $10 billion to the African economy.

The Tony Elumelu Foundation has made a $100 million commitment to the program.

More than 45,000 entrepreneurs from 54 countries applied for the 2016 program, more than double the number of applicants in the first year. The successful 1,000 candidates represent a variety of fields including agriculture, information and computer technology and fashion.

All five regions of the continent are represented. The largest numbers of entrepreneurs came from Nigeria, Kenya, Ghana, Uganda and Cameroon.

(Here is a list of the entrepreneurs from each country and their areas of interest.)

Elumelu predicted the 2016 group of entrepreneurs “will become a generation of empowered business owners who will show that indigenous business growth will drive Africa’s economic and social transformation.”

He said his foundation has invested $8 million in the 2015 group, including $5 million that went directly the entrepreneurs as seed capital. “The results have far exceeded our expectations,” he added. With funding and networking, the program has “helped extraordinary people take control of their destinies.”

In addition to receiving training and networking for nine months, the entrepreneurs will participate later this year in the Elumelu Entrepreneurship Forum.

Elumelu is a Nigerian entrepreneur and investor who is listed as #31 on Forbes’ list of Africa’s 50 richest people. He owns the controlling interest in Transcorp, a Nigerian conglomerate with businesses in hospitality, agriculture, oil production and power generation. Forbes puts his net worth at $700 million.

Elumelu became prominent in African business circles nearly 20 years ago, when he persuaded investors to take over a small, failing commercial bank in Lagos and turned it around and made it profitable within a few years. It later merged with United Bank for Africa, which has subsidiaries in 20 countries as well as the United States and the United Kingdom.

According to his profile on Forbes, he also has a stake in the mobile telecom MTN Nigeria and owns extensive real estate across the country.

As many African nations work to diversify their economies and move from resource-based revenue to manufacturing and services, entrepreneurship is considered an important way to drive economic growth.

While the continent is already seeing returns, experts say entrepreneurship holds untapped potential to drive economic development to the next level.

A 2014 study ranked Uganda as the most entrepreneurial country in the world and listed Cameroon, Angola, Botswana and Burkina Faso among the top fifteen.

The study, by Global Entrepreneurship Monitor, counted the percentage of the adult population that owned a business and paid wages for at least three months. In Uganda, the percentage was 28 percent. (Suriname in South America was the least entrepreneurial in the world with less than one percent.)

Akinwumi Adesina, president of the African Development Bank, recently reaffirmed the lender’s commitment to entrepreneurship as it seeks to promote a sense of urgency about youth employment on the continent.

In Africa 10-12 million young people enter the workforce each year but only three million jobs are created annually. Even when there are jobs, young people often lack the skills employers required.

“We need a sense of urgency for tackling unemployment,” Adesina said, noting that the bank has created a strategy that could create 25 million jobs for young people on the continent. These programs focus on agriculture, manufacturing, and information and computer technology. The bank will also index youth employment and track the labor market over time.

“The skill sets and the jobs of the future are digital. The world is changing fast,” Adesina said.