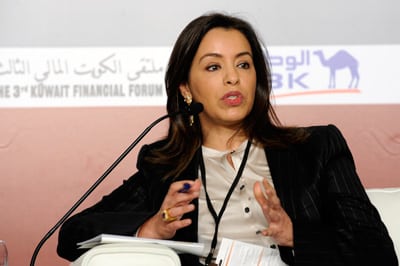 Maha Al-Ghunaim, founder and CEO of Global Investment House, is a pioneer in the world of Arab finance

In the world of Arab banking and finance, Maha Al-Ghunaim is something of a pioneer as the founder and CEO of one of the Middle East’s largest investment companies, Global Investment House. As a women in a male-dominated industry, both in the Middle East and beyond, working in a country where only 15% of women are in the workforce, she is also something of a rarity.

Al-Ghunaim trained in mathematics, graduating from the San Francisco State University in 1982, and has worked in asset management and investment banking for the over 30 years since. Straight out of university she joined the large government-owned investment company, the Kuwait Investment Authority. And she comments: “At that time they really took care of young Kuwaitis who were entering the workforce… I started from the bottom and learned how things are done and gradually moved my way up the ladder.”

She would work there for many years, before taking positions at the now dissolved Kuwait Foreign Trading Contracting & Investment Co. and the Kuwait Investment Company.

In 1998, Al-Ghunaim launched Global Investments House with four colleagues, having spotted a gap in the Middle Eastern market for integrated solutions in brokerage, asset management, and investment banking. She says: “We understood that the capital markets in Kuwait lacked certain products and services and we capitalized on that.” Focused specifically on opportunities in the Gulf Cooperation Council (GCC) and Middle East, the company chose to offer funds and investment products which were wholly new to the region, including bonds, index funds, fixed income funds, and private equity. The company also pushed research and development. “We widened the capital markets rather than everybody competing for the same slice – make the pie larger. We started to create very new funds and products,” comments Al-Ghunaim.

Global is now an investment bank with $3.7 billion under management, 210 employees, and offices in Kuwait, Bahrain, Egypt, Jordan, Saudi Arabia, Turkey, and the UAE. In 2008 the company became the first Kuwaiti firm to list on the London Stock Exchange, and was also listed on the Kuwait, Dubai and Bahrain bourses. “We started Global with a capital of $50 million in 1998 and, by mid-2008, we were trading at a $5 billion market cap,” comments Al-Ghunaim.

Steering Global through the financial crash

But the journey has not been easy. Having launched Global during the phenomenal Middle Eastern boom when oil prices were soaring, the company found itself significantly over-leveraged when the financial crisis hit in 2008. The company’s accumulated losses exceeded 75% of its capital in 2011, breaching Kuwaiti market rules, and the group’s shares were suspended from trading. One year later, it was forced to delist from the country’s stock exchange. “We found ourselves in the middle of liquidation disasters to pay off our debts and simultaneously organize Global International, regionally or locally. The financial crisis hit everyone around the globe… but also [there were] some mistakes that we encouraged in the way we do business,” she comments.

Al-Ghunaim successfully steered Global through this trying time, but needed to completely restructure the way the company did business. “We chose to be completely transparent with our clients, shareholders, and regulators throughout it all. This approach was unique in a culture that generally conceals problems, but we stuck to our commitment to being honest… Our earnings will be completely different from what we had before; it’s no longer about how much you make but about the quality of your earnings which provides sustainability and better valuation.” Now a risk-averse company, she reports that Global is well capitalized, debt-free, and profitable, and business is growing.

Committed to opportunities in the Middle East

Going forwards, her focus continues to lie in the Middle East, as committed as ever to the opportunities for Global in the region. “We create a strong bridge connecting buyers and sellers across the region. This is where we can really add value. Many investment houses offer similar expertise and experience in financial engineering and technical sides of the business, but our regional footprint, insight and placement power gives us an edge.”

Global is also continuing to pioneer in the region, adding new products to its range of billion dollar private equity funds. Two new products due to launch include a fund to invest in secondary private equity funds in the region, and a healthcare platform “which will allow investors to take advantage of the healthcare domain at the GCC-MENA-Turkey level”.

Al-Ghunaim also sees significant opportunities developing in education, consumer goods, and retail, “considering the demographics on the consumer-side, the strong inflow of expats, and the growing entrepreneurial spirit among SMEs”. And a spreading of bets across these sectors seems a particularly valuable strategy for Global considering the continued low oil prices in the region.