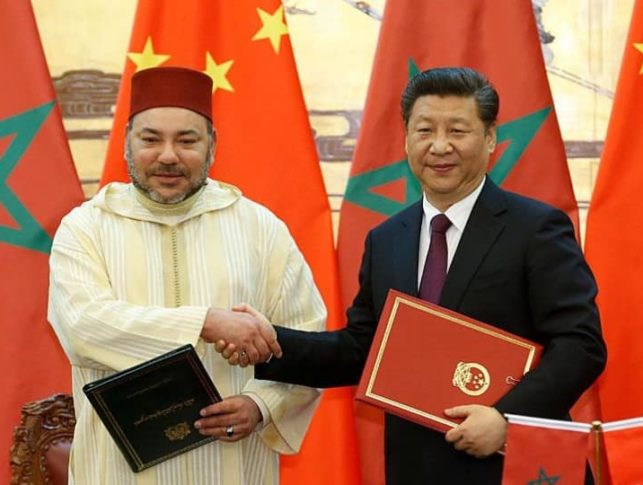 The north African nation seeks to diversify its trading partners through agreements with the Asian giant as well as India and Brazil.

While the overall effect on the Moroccan economy is under debate, experts say the agreement will create more purchasing power for Moroccans, who will have access to Chinese goods that are typically less expensive than those produced in country or elsewhere.

The move underscores China’s growing role in the economy of the continent as well as Morocco’s determination to diversify its trading partners. Morocco has also entered trade agreements with Russia and India and an agreement with Brazil is under negotiation.

China is Morocco’s fourth largest trading partner after Spain, France, and the United States. Morocco is China’s seventh largest trading partner in Africa. While trade between Morocco and China has grown in recent years, it is still dwarfed by Chinese trade with neighboring Algeria. Trade between China and Algeria reached $8.6 billion in 2013 compared to $2.3 billion in trade with Morocco.

Analysts say the new agreements could have mixed results. On the plus side, competition from Chinese goods could force Moroccan industries to better serve consumers in their country and Moroccan businesses will gain greater access to one of the largest markets in the world.

At the same time, they say, more than half of Moroccan exports are minerals, fertilizers and metals produced by large industries while small businesses struggle to compete.

Some argue that the opening of trade will cost jobs in Morocco, but others note that Moroccan and Chinese workers seldom compete for the same jobs. China’s economy is based on heavy and light industry, while agriculture, food processing and precision manufacturing dominate Morocco’s. The two countries do have some direct competition in textiles and leather.

The agreement will create more wealth in Morocco. With access to cheaper goods, even poor Moroccans will gain spending power.

With a gross domestic product of $252 billion and a population of about 33 million people, Morocco has made significant progress in integrating its economy into the global market through efforts including streamlined procedures for operating a business and launching a nascent aeronautics industry, according to the Heritage Foundation.

After a strong performance in 2015, with growth in the gross domestic product of 4.4%, the Moroccan economy has slowed this year, according to the World Bank. Drought has reduced cereal production, and GDP growth is expected to be less than 2% in 2016.

While Morocco has been a U.S. trading partner, as well as a key ally in the war on Islamist terrorism, the nation in recent years has sought to expand its trading partnerships, notably with members of the BRICS coalition of emerging economies that seeks to break Western domination of the global economy.

BRICS is made up of the emerging markets of Brazil, Russia, India, China and South Africa.

In November, Morocco announced a free trade agreement with Russia. Morocco is Russia’s main trade partner on the continent and its exports include citrus fruit, vegetables and frozen sardines.

In June, Moroccan representatives met with trade officials of Brazil to discuss a possible free trade agreement. Brazil is another importer of Moroccan phosphates and its derivatives.

Meanwhile, China is a major trading partner with other African nations including South Africa ($20 billion), Nigeria ($15 billion) and Angola ($36 billion).

China in recent years has been developing relationships with many African countries through investment, aid and trade relationships, driven largely by China’s energy needs.

Morocco, a net oil importer with strong ties to the United States and Europe, has not been of great interest to China until recently. However, Morocco has sought allies in its territorial dispute with the separatist Polisario Front in the Western Sahara.

Given China’s strong trade ties to Algeria, it seems unlikely, however that the Asian nation would support Morocco in that dispute.